One Seaport Plaza - 199 Water Street - 27th Floor
New York, NY 10038
(212) 233-5555
Executive Staff
Home
About Us
Alumni
In the News
Around Town
Recent Events
Our Clients and Projects
Services
Home » In the News » Op-Eds, Features and Interviews » The Day of Reckoning Has Arrived

The Day of Reckoning Has Arrived

In last week’s Congressional primaries, the more progressive wing of the Democratic Party once again showed its effectiveness as a political force to be reckoned with. What are the implications of this to our community?

The implications are clear and there are potentially repercussions. I refer to the fact that our community literally did not come out to vote.

For those in our community who adamantly oppose registering as a Democrat; I cannot overstress how foolhardy that is, regardless of what political ideology you subscribe to.

There are those who upon reading this will, without doubt, not mince words in their criticism of what I have said and will say. But before you let your blood boil, allow me to explain. The Orthodox Jewish community in New York City has established an unrivaled communal infrastructure, enjoys vibrant unforeseeable growth, and will IY”H continue to grow, hence requiring us to play an important role in civic life which includes voting in Democratic primaries and indeed in all elections.

There are those that justify their criticisms of communal leaders, Askanim, as sell outs and having accomplished nothing, concluding we, therefore, have nothing to gain by maintaining our footprint in the Democratic Party. Allow me to elaborate, it is quite easy to simply make blanket accusations to which all elected officials and those in public life are vulnerable to fall victim. Yes, there may be challenges in maintaining our way of life and creating a beneficial working relationship with members of government that identify themselves as progressive, however, by cutting off and unilaterally disengaging from the political process we achieve nothing. We only hurt ourselves.

Our community should find ways, and hopefully will find ways, to establish communication and collaboration in areas that we can utilize to further our interests and foster tangible results. Our political connections have accomplished this in the past and continue to provide resources for organizations and related services that so many in our community take for granted, ignorant of how we accomplished this.

Yes, there are public pronouncements from the progressive camp that would on the surface seem to create an unbridgeable divide, but creating and fostering better understanding is only achievable when: a) you make a determined effort and b) find ways on how to disagree in an agreeable fashion.

What I discovered is that when you actually sit down across the table from those with political beliefs different from your own you realize there are potential areas where we can find common ground with everyone, including the progressive wing.

As it stands our community has abdicated any form of civic participation, we have quite-literally politically disarmed ourselves in the name of boycotting the Democratic Party, essentially political suicide. I understand it is a result of frustration and anger at actions that detrimentally affected our community but how does disengaging from the political process practically help our community?

Screaming is good after davening in Shul, but it cannot and will not advance our political agenda even one iota. At the end of the day, our community is situated in liberal progressive New York City and New York State, and unless someone can wave a magic wand and have us find ourselves in Utah, we have to work with what we have.

For those who register as Republican I have this message for you: perhaps readers need to be reminded that one can still vote for the Republican nominee in the General Election even as a registered Democrat. In other words: you can have your cake and eat it too. Another point to emphasize: there are usually no or minimally contested Republican primaries hence it serves no practical purpose to register as a  Republican other than for ideological purposes which defeats the purpose of having the community determine who will actually hold office.

While it is fashionable to point fingers at the head of Mosdos, asking how helping them has affected “my wallet” or “my pocketbook”, it is crucial to understand that indeed when Mosdos are helped financially it does assist you because the cost of tuition for parents is never truly as high as the expenditures taken on by our schools. It is also crucial to understand that the progress often made by Askanim and Mosdos in our community is only facilitated through direct engagements with the powers that be.

Accusing them of compromising our communal morals is not only based in falsehood but dangerous as it manifests distrust towards the various communal structures that are vital in the production of Jewish families, the foundations of our community and key to its existence in the future.

The political maneuvering our Askanim make, even with those whose policies our community disagrees with, is the basis for the facilitation of resources and programs you, your family, and your friends enjoy. In other words, there are public forms of identification you may find distasteful, but you benefit from.

Our elected officials need to engage and vote a certain way that you may dislike, but have the potential to benefit you and your family in a real and credible way, even if understanding the nuances behind every decision in which they engage is anathema to you. Keep in mind that if you undermine the Askanim or Mosdos you are causing irrevocable damage to our community. While you may be dismissive to my words, I want you to understand that while no one is perfect, you are doing nothing to advance our community’s agenda.

Only when we have a seat at the table can we even fathom to accomplish anything. A seat at the table means voting in primaries and elections. That means being registered as Democrats because the vast majority of Democratic primaries in New York City decide the later election and essentially determines who will take office. The survival of our community in the form and with the freedom we have now depends on it.

Years ago, the Orthodox Jewish community was known for voting in greater proportion to other communities in New York City. However today, while other communities are registering and coming out to vote we are doing nothing. Who are we helping? Certainly not ourselves! All in the name of political purity. Politics is not religion -- it requires compromise in order to get anything from it.

For all those that want me to prove my point consider the following: by not registering to vote in a Democratic primary you are only empowering others who may have a different perspective than those of our community. How can that further our community's interests? It is in the interests of those with whom we truly disagree that we register Republican and avoid the Democratic primary. That would mean our viewpoints would go completely unheeded.

If the Orthodox Jewish community of New York City voted together as Democrats, we would have the power to impact the outcome of elections, our needs would need to be heard, and if our elected officials did not listen to us they would lose their next election, but only if we are all registered Democrats.

The Jewish communities of New York City are thriving beyond what anyone could have fathomed years ago. By giving up our political leverage, I fear that statement’s truth will not endure the next decade. 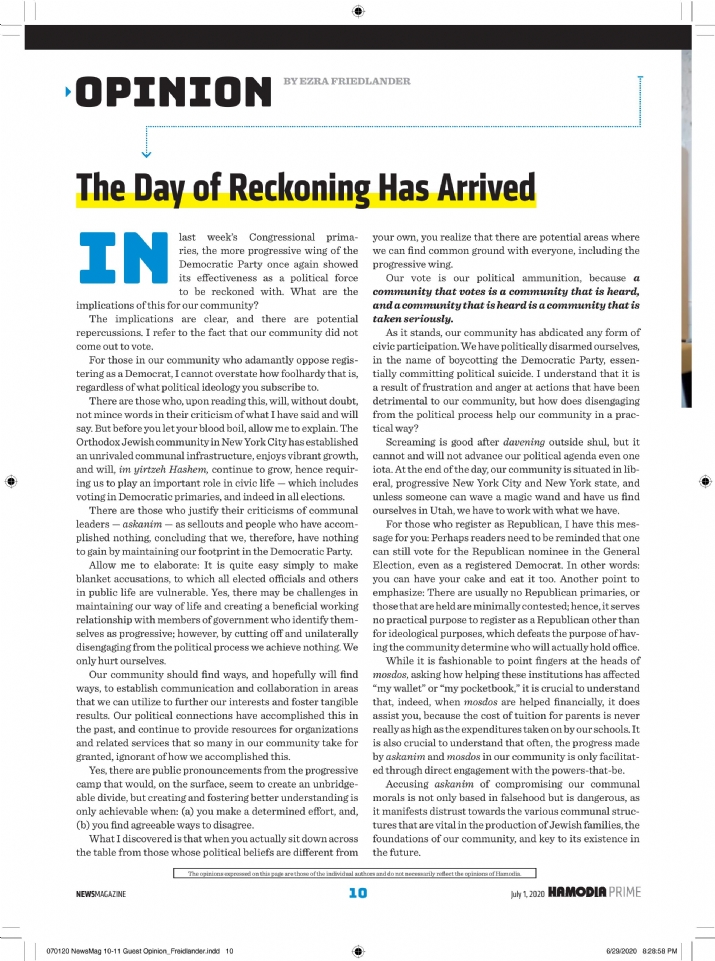 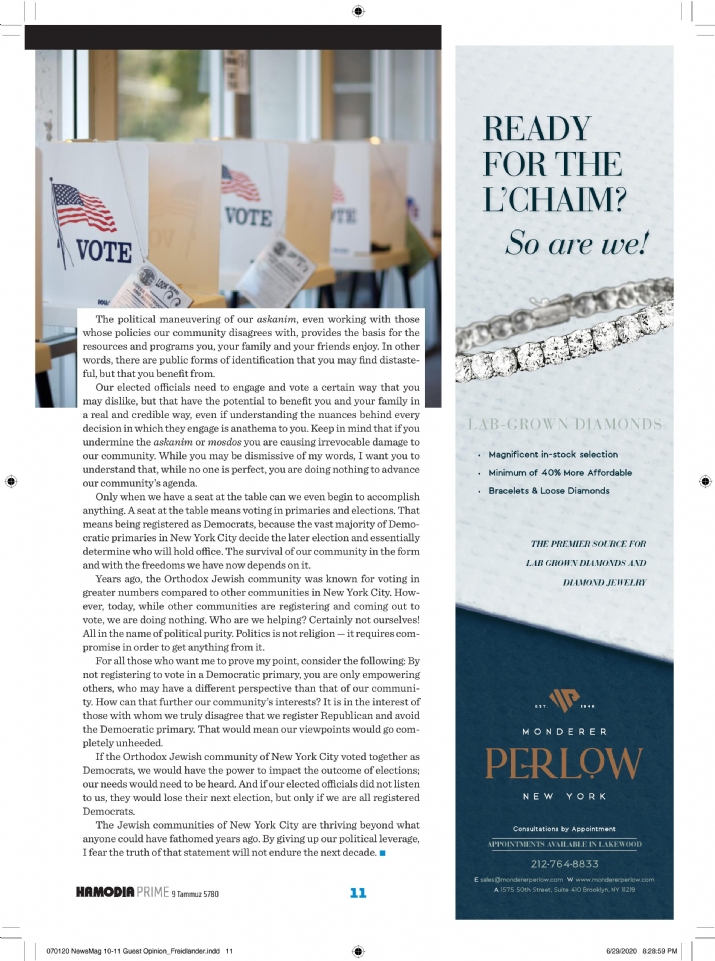 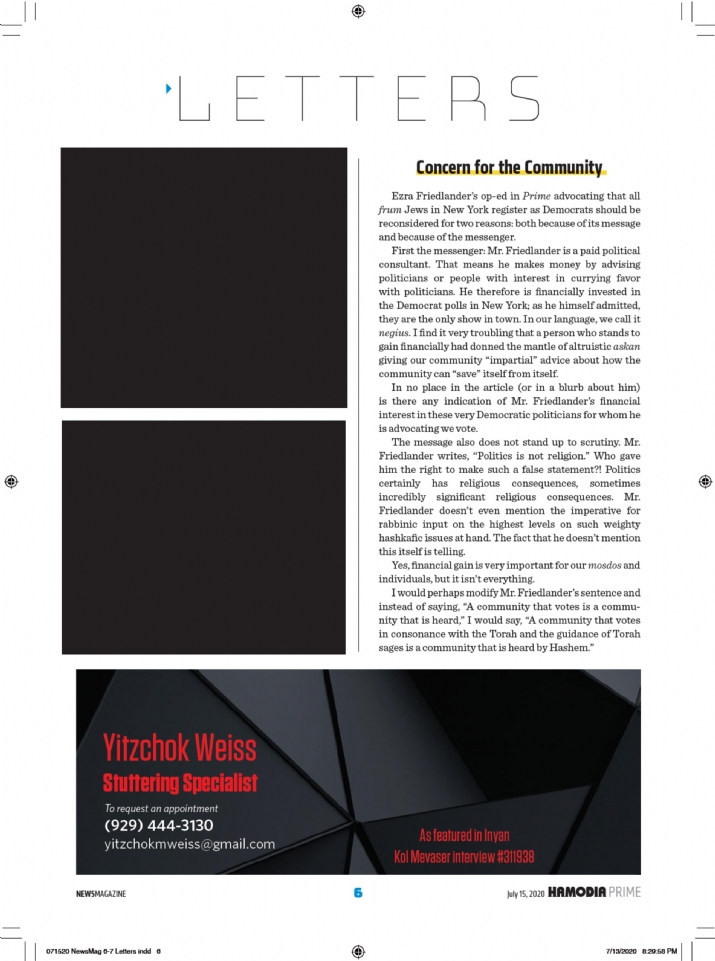 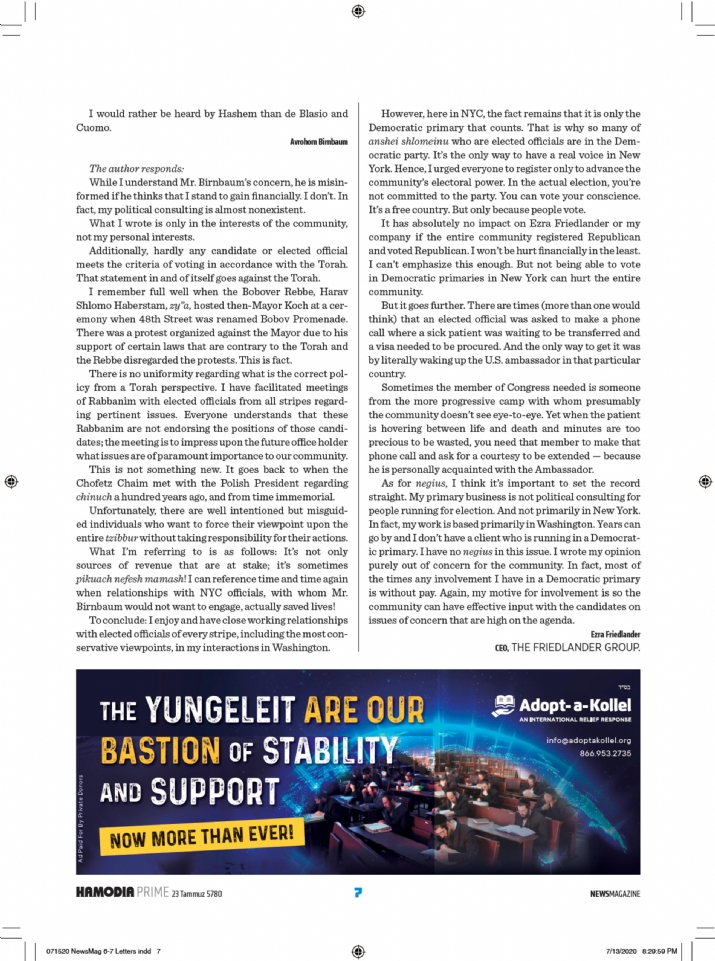