On May 25, the United States Senate will celebrate Jewish American Heritage Month by officially recognizing several outstanding Jewish Americans who have greatly enriched the fabric of American life. Prominent Members of the US Senate will be participating and heralding the accomplishments of this year's honorees who include:

Senator Orrin Hatch, R-Utah, Chairman of the Senate Finance Committee and former chairman and current longest-serving member of the Senate Judiciary Committee and President Pro Tempore of the United States Senate (third in the line of succession to the presidency will be presenting his longtime friend J. Morton Davis with a Lifetime Achievement Award at the Jewish Heritage Month Celebration.

J. Morton Davis, owner and Chairman of D.H. Blair Investment Banking Corp. The over 400 companies for which he has raised more than $3 billion have created countless jobs and have added exciting new products including breakthrough drugs, unique electronic and telecommunications products. Mr. Davis served on the Board of trustees of Yeshiva University and on the Board of Sy Syms School of Business.

Rabbi Hillel Zaltzman of Chamah, who was born in Kharkov, Ukraine. His family fled the Nazis to Samarkand, Uzbekistan, where he grew up. When simply being a Jew posed a grave danger, sixteen-year old Hillel entered the Jewish underground-whose mandate was to keep Judaism alive in the crosshairs of the KGB by carrying out missions throughout the Soviet Union. Zaltzman immigrated to America in 1974. In his widely-acclaimed literary work, Samarkand, The Underground's Far Reaching Impact, Zaltzman transports the reader to times gone-by, painting a graphic picture of legendary heroes by describing in vivid detail the fascinating story of the self-sacrifice of a small group of Jews who bravely fought the mighty, brutal Soviet regime, and prevailed.

Thomas B. Corby, President of the LA based Erwin Rautenberg Charitable Foundation, whose support has enabled the USC Shoah Foundation, Jewish Home for Aging, Holocaust Survivors Justice Network, and The JVS Scholarship Fund. Mr. Corby is a major force behind the humanitarian work of these organizations. His generosity and tireless support has literally turned around the lives of thousands.

Mrs. Ruth Lichtenstein, founder of Project Witness, will be recognized for her trailblazing accomplishments in the realm of Holocaust education. Project Witness offers groundbreaking resources for Holocaust education while remaining deeply committed to its unique mission of exploring the spiritual, ethical, and intellectual responses of Holocaust survivors and victims. By focusing on the character, identity, and faith of survivors and victims alike, Project Witness serves to ensure that their legacy guides us and future generations toward a more hopeful future.

Rabbi Marc Schneier, President of the Foundation For Ethnic Understanding, is an international figure who is renowned for his dedication to strengthening cooperation and reconciliation among ethnic and religious communities most notably in the field of Black-Jewish Relations. Rabbi Schneier is the author of Shared Dreams: Martin Luther King, Jr. and the Jewish Community.

This event will be co-chaired by Greg Rosenbaum, whose leadership has greatly enhanced the Jewish Heritage celebrations on Capitol Hill; Hon. Norman Eisen, former Ambassador to the Czech Republic; NYS Assemblymember Phil Goldfeder; Stanley Treitel, Co-Chair of the Wallenberg Commission; and coordinated by The Friedlander Group, under the stewardship of Mr.  Ezra Friedlander who remarked that this year's honorees, "literally represent the gamut of Jewish contributions to the United states, ranging from fighting for religious freedom, philanthropy, Holocaust remembrance and education, business achievements , civil rights, and successful integration of an immigrant community." 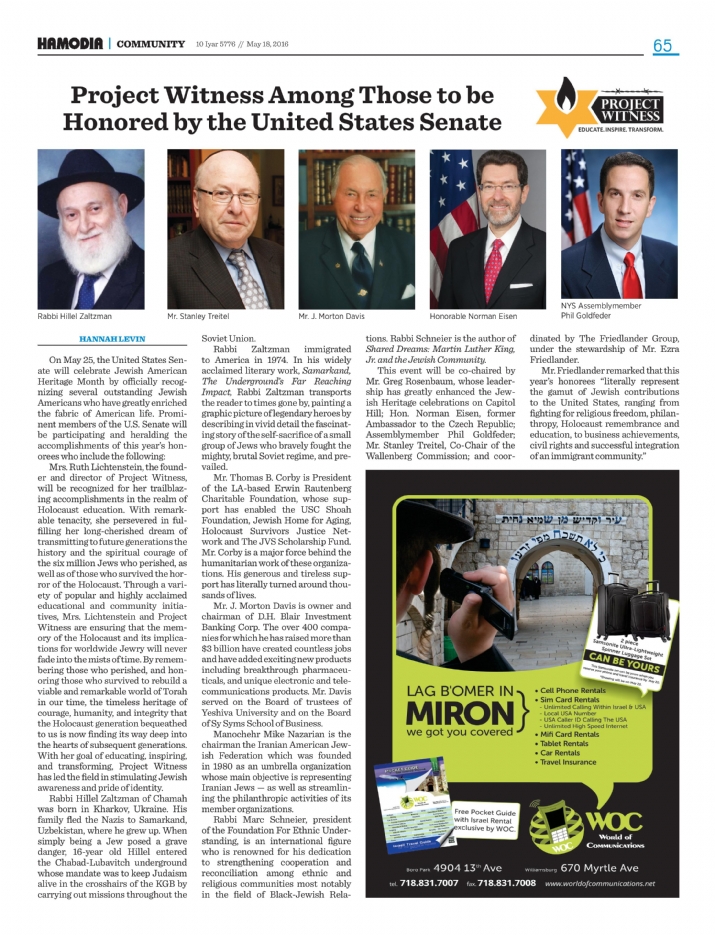 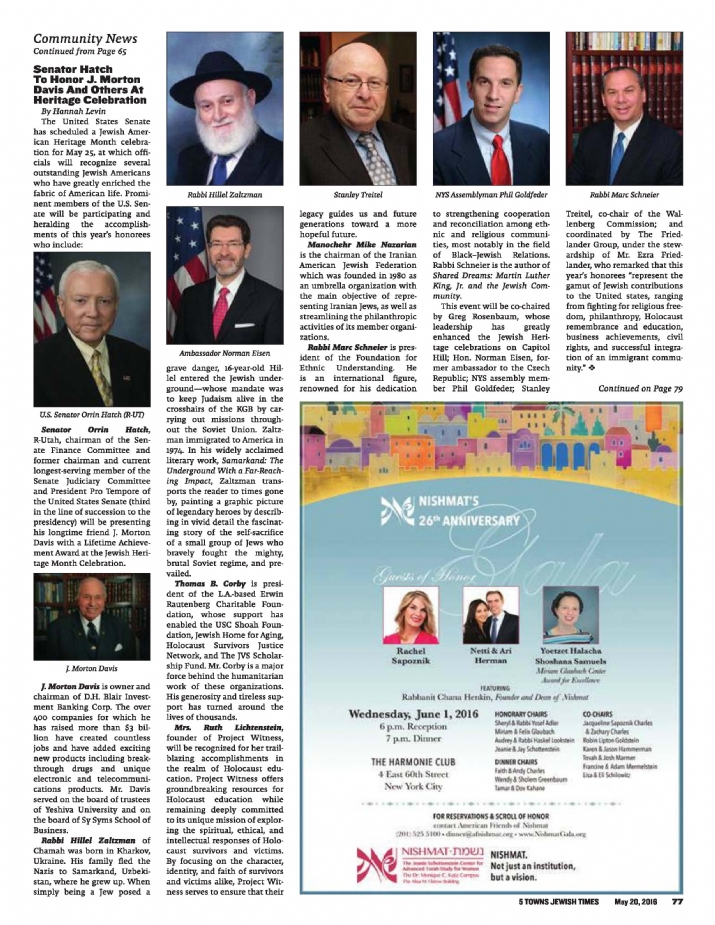