Legislation to recognize World War II hero Raoul Wallenberg with the country’s highest civilian honor was passed unanimously on July 11, 2012 by the U.S. Senate, clearing the way for the lawto be signed by President Obama.

“Raoul Wallenberg’s heroic rescue of Hungarian Jews during one of the darkest hours of human history exemplifies his outstanding spirit, his dedication to humanity and the responsibility for us all to speak out against atrocities,” Senator Kirsten Gillibrand (D - NY) declared.

Wallenberg was a Swedish diplomat recruited by the US War Refugee Board to save Hungarian Jews from deportation in 1944, and was given a diplomatic passport, a large sum of money and instructions to save as many lives as possible, using any means at his disposal. He is credited with saving more than 100,000 Hungarian Jews over a period of six months. Wallenberg was arrested by Russian soldiers in January of 1945 and his fate remains unknown.

Among those who were saved by Wallenberg was the Liska Rebbe, Rabbi Yoizef Friedlander z.s.l., whose grandson, Ezra Friedlander, is CEO of The Friedlander Group, which founded the Raoul Wallenberg Centennial Celebration Commission. This national campaign was established in order to commemorate and publicize Wallenberg’s historic and heroic actions in honor of what would be the centennial of his birth on August 4.

Honorees included: Andrew Stevens, a Holocaust survivor who forged documents used by Wallenberg in his rescue efforts; Emil Fish, Founder and President of the Bardejov Jewish Preservation Committee, which works to preserve and create a memorial to the survivors of the Holocaust in the Jewish Suburbia in Bardejov, Slovakia; Dr. David Moskovits, President of the Endowment for Democracy in Eastern Europe, who established the first American and Jewish school in post-Soviet era Hungary. 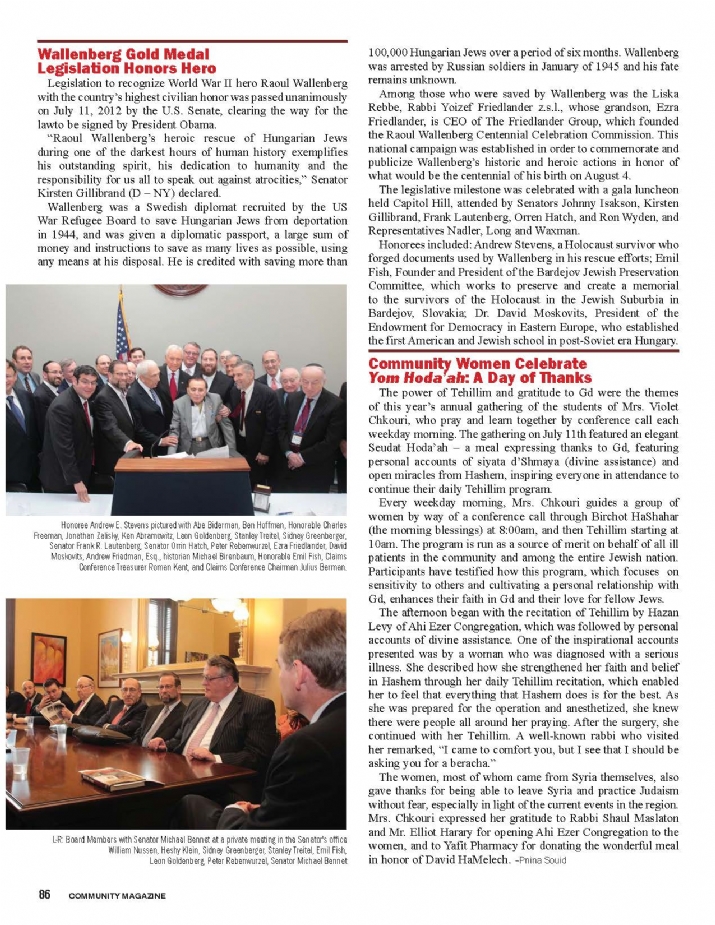