"During the last Gaza conflict, Iron Dome achieved a 90 percent success rate at shooting down incoming rockets," Rep. Nita Lowey (D- NY) pointed out during the ceremony.
Referring to the founder and CEO of The Fried- lander Group, Rep. Debbie Wasserman Schultz (D- FL) told those in attendance, "In matters of Iron Dome, Ezra Friedlander consistently makes sure the Capitol Hill community understands how important it is that we remain vigilant."

Funding for Iron Dome has not been without problems. In August 2014, as Israel was being bombarded by missiles from Gaza, the Israeli government sub- mitted an emergency request for $225 million to accelerate production of components used in the Iron Dome system and to maintain adequate stockpiles. Sen. Tom Coburn (R- OK), concerned about budget deficits, blocked the funding until Senators John McCain (R- AZ) and Lindsey Graham (R- SC) convinced him to change course.

An earlier congressional bill to provide the funds failed due to partisan gridlock over a separate measure regarding the migrant crisis at the Southwest- ern U.S. border.

Event co-chairmen Eli Verschleiser, Miles Berger, Joseph B. Stamm, Sol Goldner, Leon Goldenberg and Stanley Treitel expressed their deep gratitude for Congress's commitment to protecting civilian populations.
Noting that several Arab countries are reportedly interested in buying Iron Dome to defend against the growing threat of Iranian missiles, Verschleiser said, "We see how Israel is once again 'the canary in a coal mine,' and with the help from the U.S., how Iron Dome has saved countless lives and prevented escalation on numerous occasions."

For that reason, he continued, "We owe a special appreciation to the members of Congress whose leadership has enabled this crucial funding. Now more than ever we must continue to honor the U.S.-Israel Security Alliance and those who work tirelessly to maintain it." 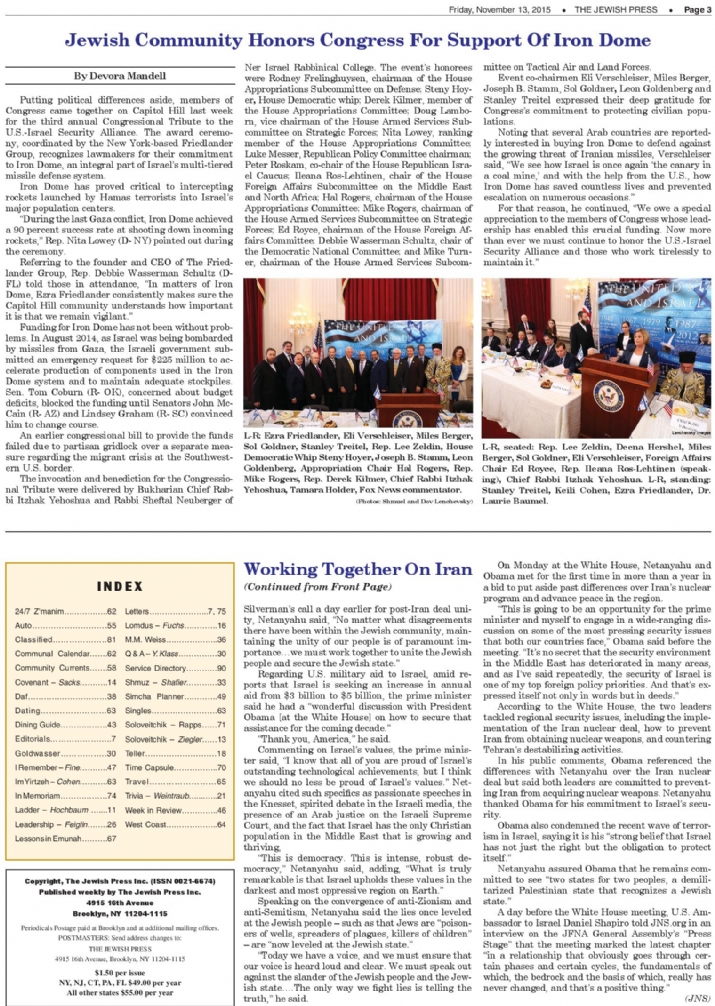