Friday, July 04, 2014
Jewish Press Coverage
With his acceptance of the Congressional Gold Medal in the Capitol rotunda, outgoing Israeli President Shimon Peres joins Winston Churchill and Nelson Mandela as one of only three foreign heads of state to receive the highest civilian award in the United States.

Republican Senator Kelly Ayotte and Democratic Senator Michael Bennett introduced legislation to honor Peres with the medal for his decades long role in cementing the exceptionally close alliance between the United States and Israel in August 2013.

The effort to recognize Peres for his service and to publicly affirm the close relationship between the United States and Israel began two years ago and was initiated by Ezra Friedlander, CEO of The Friedlander Group, and spearheaded by Robert Rechnitz, chairman of The Jerusalem Conference and Iron Dome Tribute, and by Lee Samson, of the international board of trustees of Jerusalem's Museum of Tolerance and chairman of the Kiryat Shemona Foundation, as well as Simon Falic of Miami Beach, Ron Plotkin a major supporter of the Republican Jewish Coalition, Stanley Treitel, and Hassan Ali Bin Al, as International Chairman of the Shimon Peres Congressional Gold Medal Committee.

"This was not about political leanings, whether left or right," said Rechnitz, "but instead about a great Jewish leader who has brought honor to Israel in the eyes of the world
and that is what's important during these difficult times."

"There are singular moments in one's life which remain indelibly imprinted on the mind," said Samson. "The ceremony presenting President Peres with gold medal was one such moment. Each speaker expressed that the bonds that were forged when the U.S. was the first country in the world to recognize the independent Jewish State of Israel will remain steadfast forever."

In recognition of their efforts to publicly strengthen the bond between the United States and Israel, Peres honored Samson and Rechnitz with the U.S.-Israel Advocacy Leadership Award. 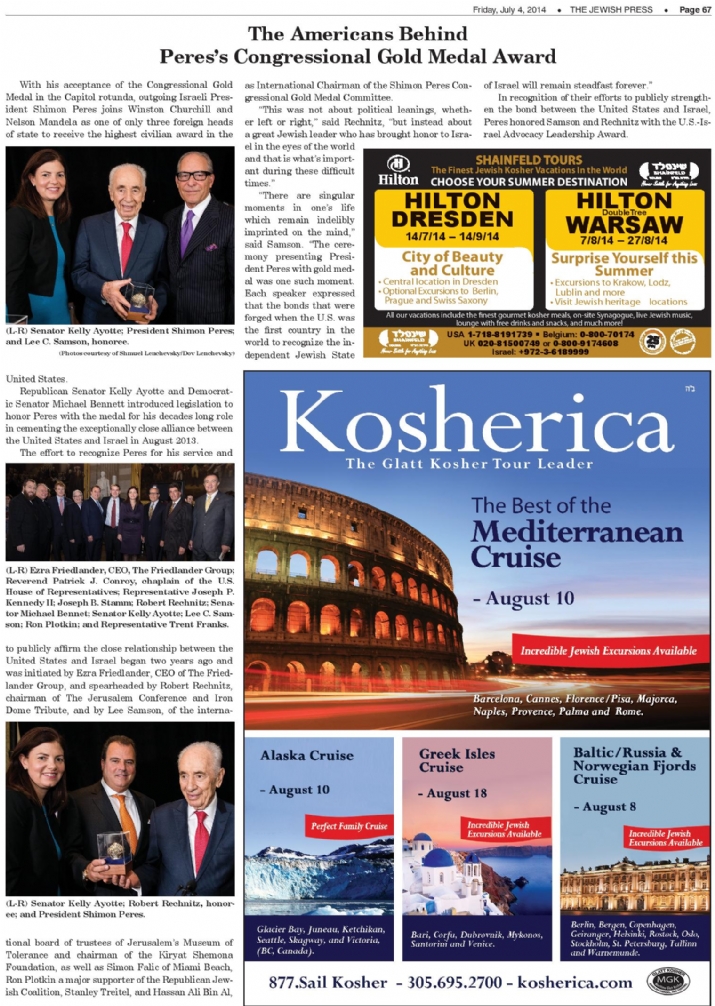