by 5 Towns Jewish Times' Editor Larry Gordon
Last week I attended a tribute to the U.S. Congress and the support of legislation that funded Israel's Iron Dome and David's Sling technology to the tune of hundreds of millions of dollars. This is an annual event, six months in the planning by chassidic political consultant Ezra Friedlander who works his way around Capitol Hill with ease and panache.

You can see in the way he interfaces with some of the most influential members of Congress a confident and real expression of gratitude for the bipartisan support for Israel that this group of congressmen and women are representative of. "Some members of the House used to ask why we were doing this and what it was that we wanted in return," Friedlander said on the way to Washington. "I told them and still tell those who ask that we do not want anything - just to say thank you. And they greatly appreciate that."

Friedlander manages to attract important members of Congress to events like these that he organizes several times a year. And there were powerful and influential members present at the Iron Dome tribute last week as well. We will get to who they were and what they had to say shortly. For now it is important to note that while support for Israel in Congress is strong-as it has always been-there are also some serious problems.

First off, Congress today is unpopular, weak, and ineffective on numerous levels. It is an enigmatic legislative body that is controlled by a Republican majority in both houses with the inability to rein in a president who stretches law so as to implement his personal agenda before his administration dissolves into history.

Last week's luncheon in the Cannon Building took place in the shadow of the just-completed visit of Prime Minister Benjamin Netanyahu to the White House for talks with President Obama. Needless to say, after seven years in office, there is a contrast, if not somewhat of a conflict, between the way Israel is viewed by Congress and the tension that always seems present when the White House is involved.

The Republicans that we heard from last week at the Iron Dome tribute are hands-down on board with Israel and the positions taken by Mr. Netanyahu. The Democrats, though supportive of the Jewish state, would seem to have an issue if their words had to be matched with their actions.

Ed Royce is a Republican congressman from Los Angeles and has been serving his California district in the House since 1993. He is an outspoken and direct supporter of Israel and proud of it. Royce was forceful and incredulous when he spoke about the fact that we as a country are so nonchalant about Iranian leaders leading the hordes in chants of "Death to America."

"Incitement was critical to setting the tone and facilitating the advent of the Holocaust," Congressman Royce said. He recounted how on a recent trip to Israel he made a side trip with some colleagues to Ramallah to see PA President Mahmoud Abbas. The Palestinian president, now in the 11th year of his four-year term is notorious for his expertise on the subject of Holocaust denial. Royce shared with the audience that his father was with U.S. troops that liberated Dachau and that his father had taken photographs. Royce brought the photos with him to Ramallah to show Abbas. "Let's get rid of the propaganda and the deception," he said he related to Abbas at the time.

Of all the presenters, the one who probably grabbed the attention of a lot of folks busy with their lunch was Democratic congressman of California, Brad Sherman. He is certainly not your predictable run-of-the-mill, toe-the-party-line Democrat. Sherman has a history of-for most of our readers anyway-what we can call very pro-Israel positions. Sherman is apparently not lined up with President Obama when it comes to Israel. Sherman, unlike most Democrats, vociferously opposed the Iran deal and in the few minutes that he spoke, he enunciated two positions very clearly. He said that the U.S. should increase funding to Israel and that the U.S. Embassy in Tel Aviv should be moved to Jerusalem.

Surprisingly, one of the most stunning comments was made by Congressman Doug Lamborn of Colorado who is a Republican. Considering his helpful pro-Israel position, I found it a little shocking when he said that by funding the Iron Dome that saves lives, the missile defense system has also allowed Israel to show restraint and offer up a gradual response to missile attacks from Gaza instead of using the full force of the IDF to counter those constant, though lately less frequent, missile assaults.

I was sitting there taking notes and when Mr. Lamborn said that I kept thinking, "Did I hear right or not?" In his defense, I will go out on a limb and say that I don't believe he realized what he was saying. But the idea that a benefit of the Iron Dome technology is about allowing Israel the ability not to retaliate at their deadly enemies is absurd.

I asked Ezra Friedlander what he thought about the Lamborn statement and he suggested that I was misinterpreting the congressman's sentiments. "Doug didn't mean that Israel should not be hitting back hard at those who fire missiles at their citizens," Ezra explained. "Rather, he meant that because of the luxury of Iron Dome, Israel does not have to act hastily but can be circumspect and hit them when it best suits Israel." I hope that is what he meant.

As long as we are on the subject of disorganized or misplaced thinking, it was important to pay careful attention to Florida Democrat Debbie Wasserman Schultz. The troubling thing about Ms. Schultz, whose statements are pleasing to a pro-Israel audience, is her active support for the president's deal with Iran, of which she was a leading proponent.

How does being an outspoken advocate for Israel jibe with supporting an agreement that is snuck into law and poses the greatest security danger to Israel in her six-and-a-halfdecade history? There is no rationale here; it is simply a fundamental contradiction. It is understood and even accepted that Democrats are going to vote in support of their president, but please don't insult our intelligence by voting to arm Iran with dangerous nuclear weapons and then stand before us expressing solidarity with Israel, telling us that, "As a Jewish mother, nothing is more important than a safe Israel." First of all, what does being a Jewish mother have to do with Israel's safety? Secondly, the facts demonstrate that the proclamation is deceptive. So please, give us all a break.

At the luncheon, Mike Rogers, a Republican congressman from Alabama, didn't mince any words but just said that he was a Baptist and believes what the Bible says about standing with Israel. "'Those that bless you shall be blessed and those who curse you will be cursed' ... I don't want to stand on the wrong side of G-d," Congressman Rogers said.

Long Island congressman and the only Jewish Republican in the House, Lee Zeldin, was there. He said that he was in Israel in August and while he goes there to offer support to Israelis, it is he who comes away from these visits inspired with confidence about Israel's future.

Congresswoman Nita Lewey, a great longtime friend of Israel in Congress, talked about the tradition of bipartisan support for Israel and the fact is that there is a great deal of that. But there is also too much double-speak and talking out of two sides of one's mouth. Still it was a great tribute and a great day for Israel's supporters both in Congress and out here in everyday pedestrian life.

Some of the lay chairmen who paid tribute to and introduced the members of Congress were Sol Goldner and Stanley Treitel of LA, Rubin Margules, Eli Verschleiser, Joe Stamm, Leon Goldenberg, and others.

Despite some of the contradictory sentiments expressed, it was a great day for Israel and the American Jewish community. At the end of the day, despite some of the political zigzagging, the U.S. support of Israel and projects like Iron Dome are literally lifesaving efforts. Sure it's easier to say that Israel's security is your utmost concern while some of your actions demonstrate the opposite, but that's politics and that is how the game is played in DC.

Ezra Friedlander gets all the credit for putting together a remarkable tribute. He's a talented and capable young man-one we can all be thankful for and very proud of. 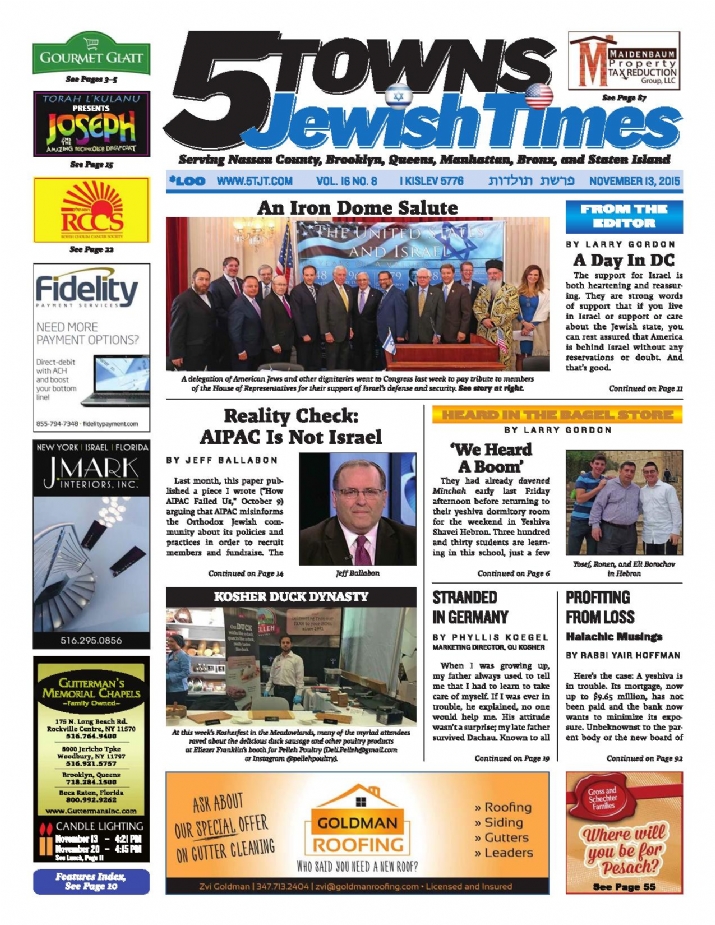 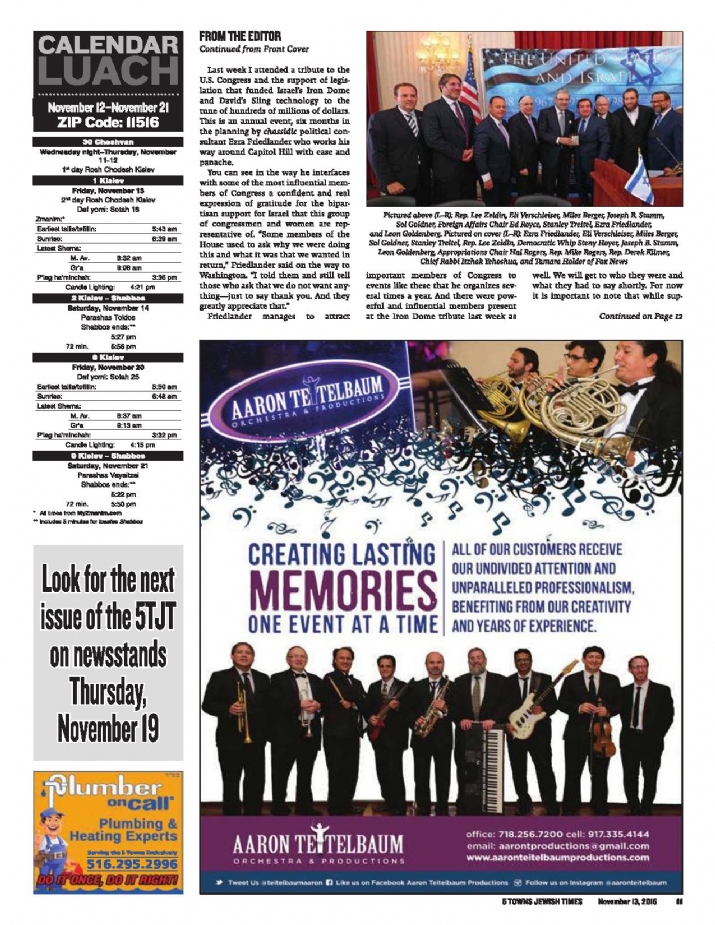 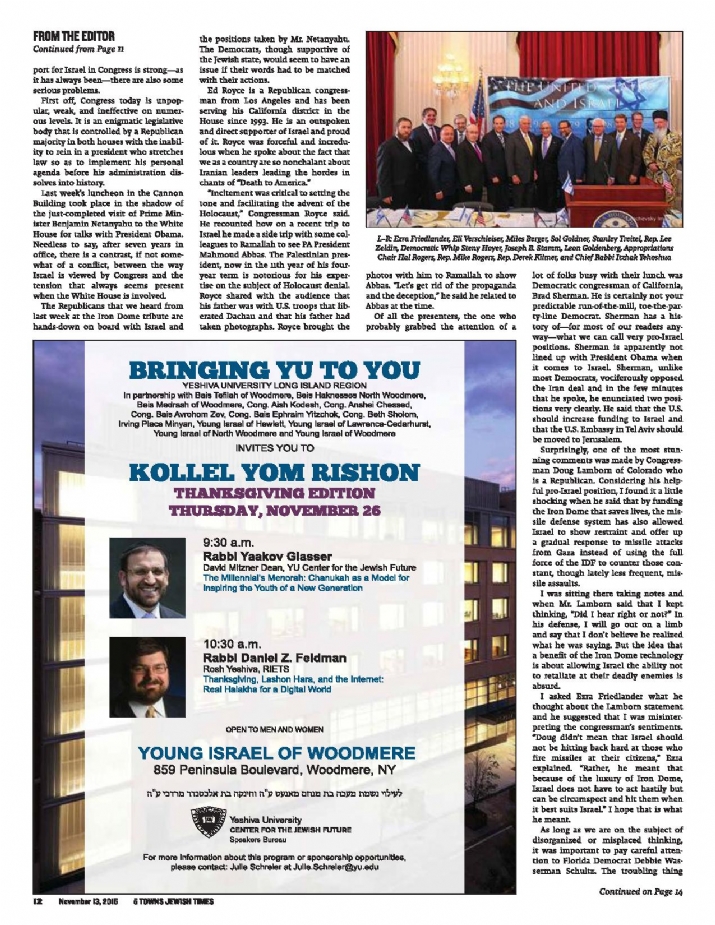 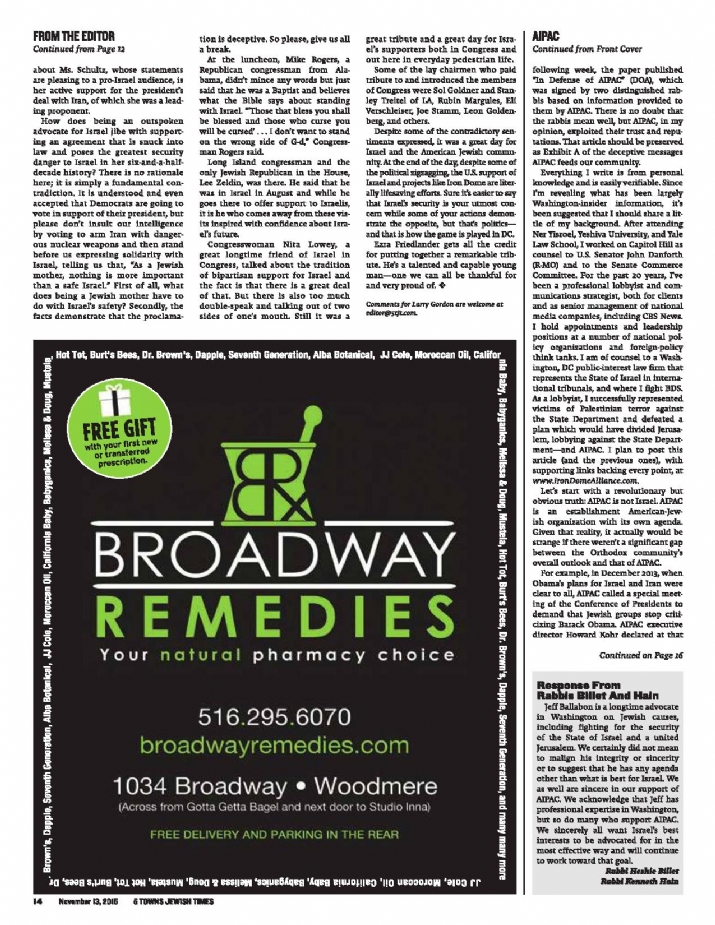