Anyone visiting the nation's capital is sure to notice the iron scaffolding encasing the renowned capitol dome, which is undergoing renovations to restore the iconic symbol of democracy to its original pristine glory.

The protective iron structure served as a visual metaphor for the historic event taking place at the nearby Russell Senate office building. Both the House of Representatives and the Senate are housed in opposite sides of the Washington landmark. Both sides of the dome were well represented, as well as both sides of the aisle, appearing together in a show of unity, in a tribute of acknowledgement, for congressional support of Israel's Iron Dome anti-missile defense system. The anti-missile batteries and rockets launched relentlessly from Gaza into Israel at civilian targets this past summer during "Operation Protective Edge".

The well planned and executed tribute was no small feat, bringing an all star roster of congressional leaders together, along with lay leaders from the Jewish community in a jam packed schedule. The event was deftly orchestrated by Ezra Friedlander, CEO of the Friedlander Group, and his skilled team of talented professionals, who tended to every detail, from keeping speakers within allotted times, catering, to transportation.

The tribute was co-chaired by business leaders Simcha Lyons, his son, Jason Lyons, Florida political leader, Stanley Tate, and entrepreneur, Elliott Gibber. Standing next to a stunning backdrop of Israel, from the Truman presidency through the current administration, Jason Lyons masterfully introduced the glittering roster of congressional participants in attendance, each of whom spoke eloquently and meaningfully. Each was presented with a newly minted medallion from the Israeli mint, commemorating the event. Jason Lyons commented on the Jewish value of hakorat hatov, gratitude, as expressed in the repetition of the Modim stanza of the Amidah, which demonstrates the requirement for each individual to express thankfulness. His father, Simon Lyons also set the stage, acknowledging the commitment of the Congress with a moving story about an elderly Israeli gentleman, watering a small patch of grass in his yard, tenderly, with particular care. When asked what warranted such attention to what seemed to be such an insignificant patch of grass, he replied that during the War in Europe, he and his family fled the Nazis, who had pursued them outside their town. On the verge of being caught, they found and hid in a field flowing with tall grass, which shielded them from being seen and captured. "I water this grass, here in Israel, in gratitude for the tall grass that G-d nurtured to protect us..." "So too," said Mr. Lyons, "these congressional leaders are the 'tall grass' that continues to help Israel be protected from those who seek its destruction.'

With cogent introductions, the Senators and Congressmen and women who spoke each added their own personal reflections on America's commitment to support Israel's defense landscape. (The entire program is available in both audio and video format from the Friedlander Group.) Among those who spoke were Senator Roy Blunt of Missouri, a long time friend of the Lyons family, who lauded the bi-partisan effort to protect Israel's citizens, including Americans from his home state.

The ever feisty Senator from Maryland, Barbara Mikulski referred to Israel as a "treasured friend and ally" that "fights above its weight". She mentioned a childhood friend who converted to Judaism, and now lives in Israel, who called to thank the Senator for her efforts to help Israel deter the murderous attacks on its citizens. The childhood friend and her family were among those citizens.

Senator Mark Kirk from Illinois was demure in his praise, and while commending the over 600 million dollars Congress actually allotted for the Iron Dome program, felt the administration could do more toward its amiability toward Israeli leadership.

Retiring Senator Carl Levin from Michigan addressed the common core values of democracy between the two countries, as did Senator Mike Lee of Utah. Senator Chuck Schumer of New York emphasized the bi-partisan unity galvanized by the event. He noted that while a student at Harvard, he studied with a relative of one of the victims of the murderous attack in Har Nof, and personalized the tragedy, which left a tangible pull in the packed room.

But perhaps the coup de grace were the riveting remarks of Texas Senator Ted Cruz, who said, "It is America's privilege to stand by Israel with whom we stand united in our dedication to the highest tenets of America's core values."

The tribute culminated with a poignant recitation of a passage of Tehillim by everyone, led by Ner Israel's, Rabbi Sheftel Neuberger.

Following the ceremony, the contingent of nearly fifty lay leaders were efficiently shuttled to the Eisenhower Office Complex, part of the White House complex for a briefing on the Iron Dome program, by White House advisors. The White House was represented by Matt Nosanchuk, Director of Outreach, National Security Council; Maher Bitar, Director for Israeli and Palestinian Affairs, National Security Council; and Eric Lynn, Special Advisor on the Middle East, Office of the Secretary of Defense.

One other thought that came to mind as we left the city, now well after nightfall. We could see the fully lit Capitol building glistening in the night, with the protective iron scaffolding still visible.

I couldn't help thinking as we left Washington that evening that the eloquence of the day would recede into history, a dim puff of rhetorical, albeit meaningful stardust. But what would remain was the acknowledgement of good in the"tall grass" of the righteous, clear thinking legislators and lay leaders. But something else would linger longer - the "Amen Yehei shemei rabbah" that resounded at the end of Mincha that was davened in that very room at the tribute's conclusion. Undoubtedly, it is the Guardian of Israel Who fortifies and forms the quintessential shield, the Magen Avraham that protects His people and those who strive to aid them... 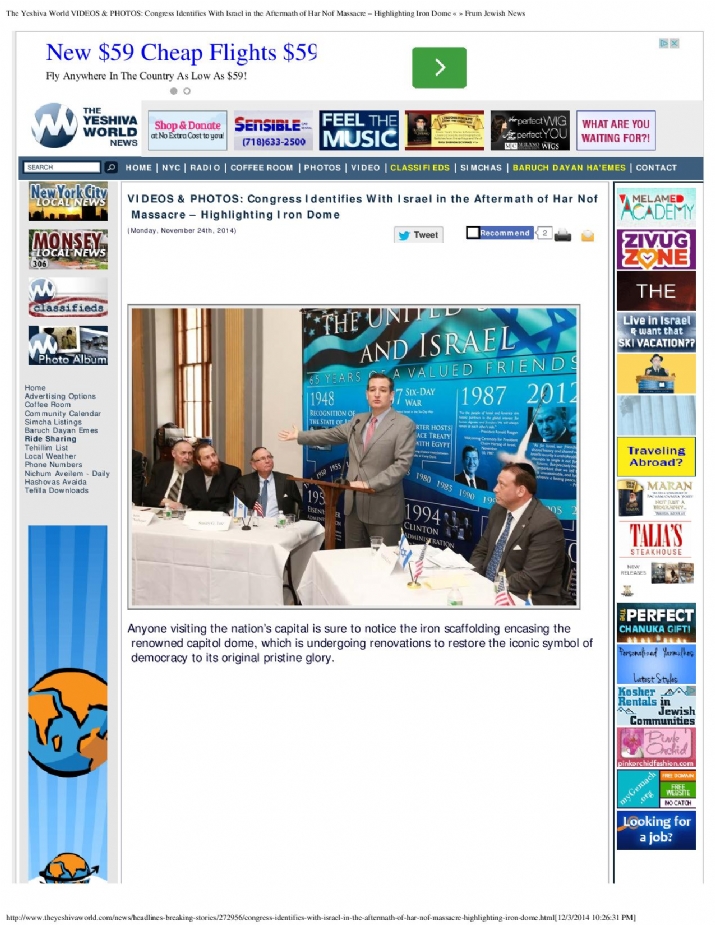 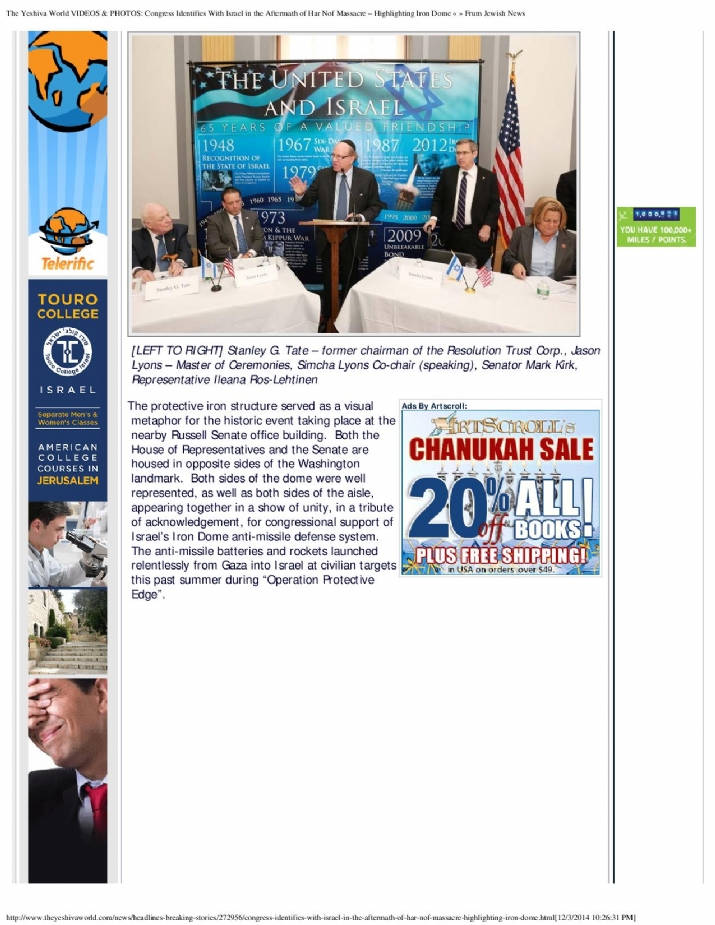 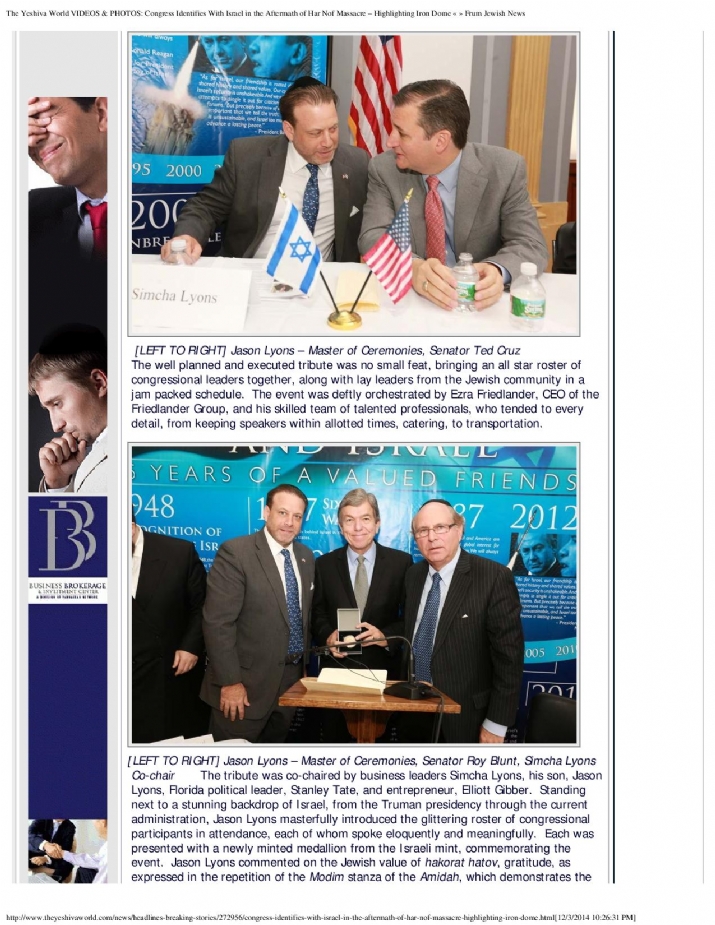 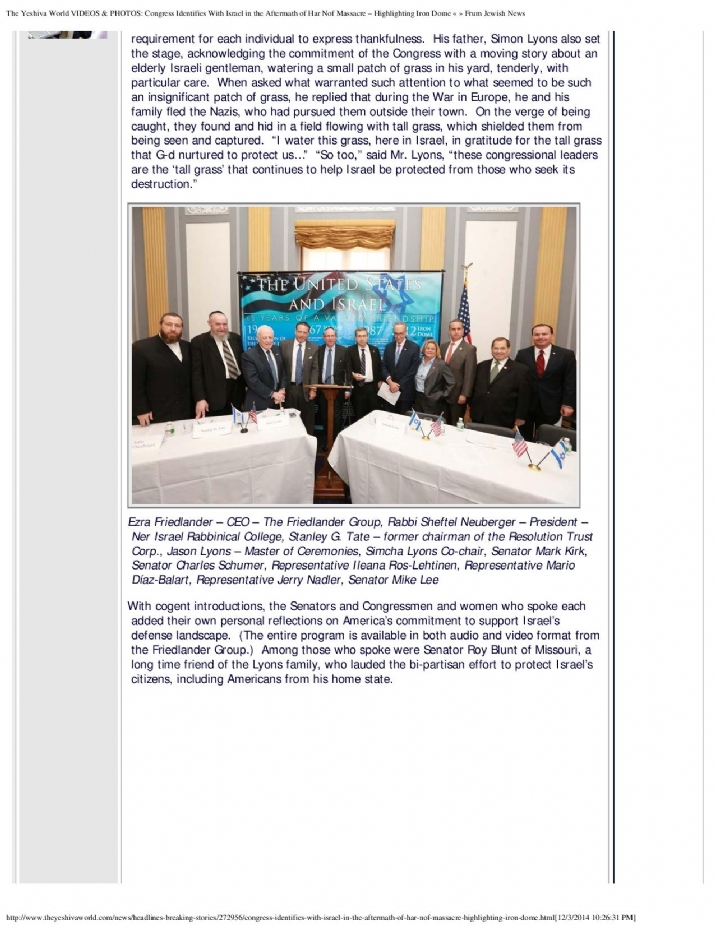 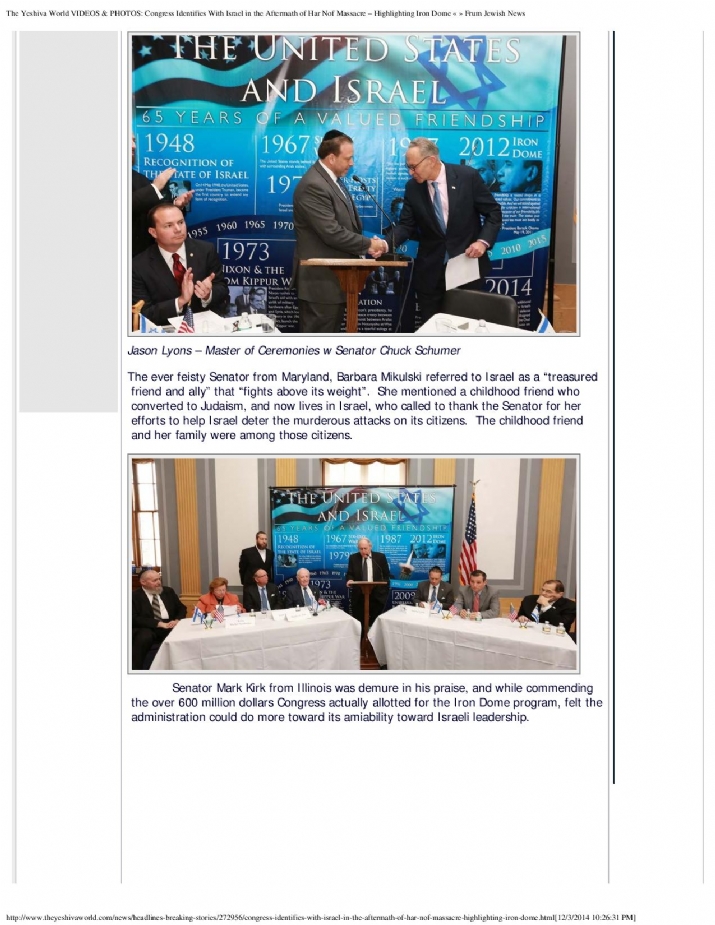 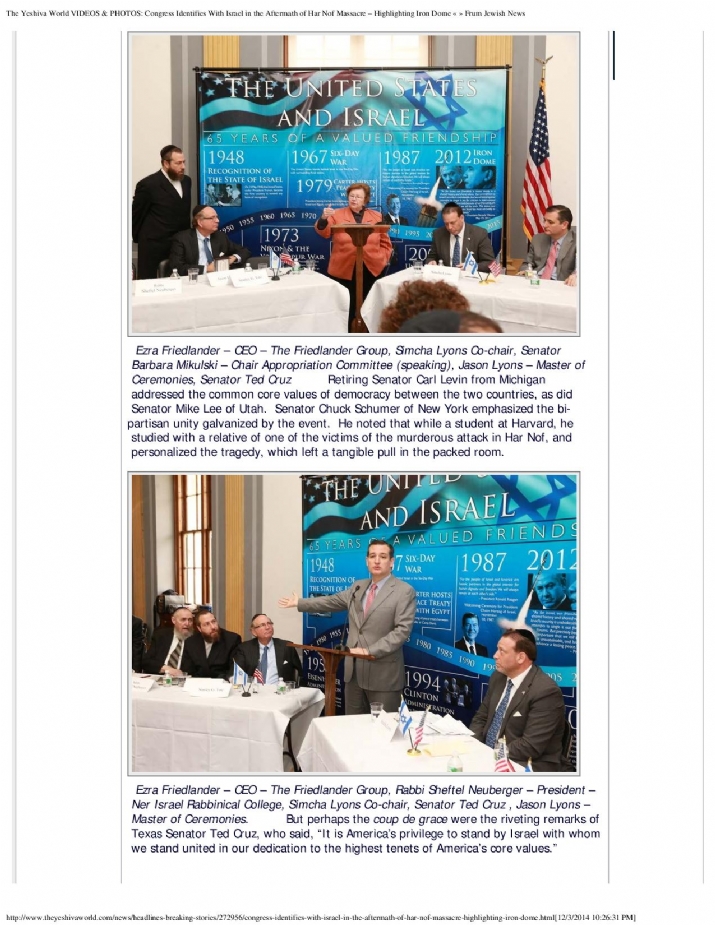 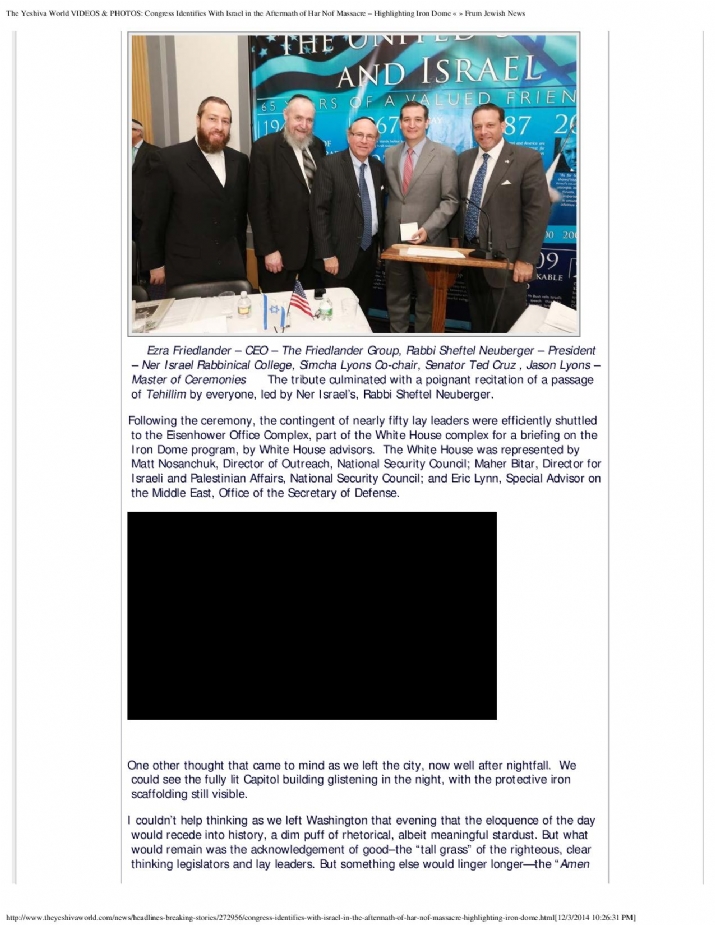 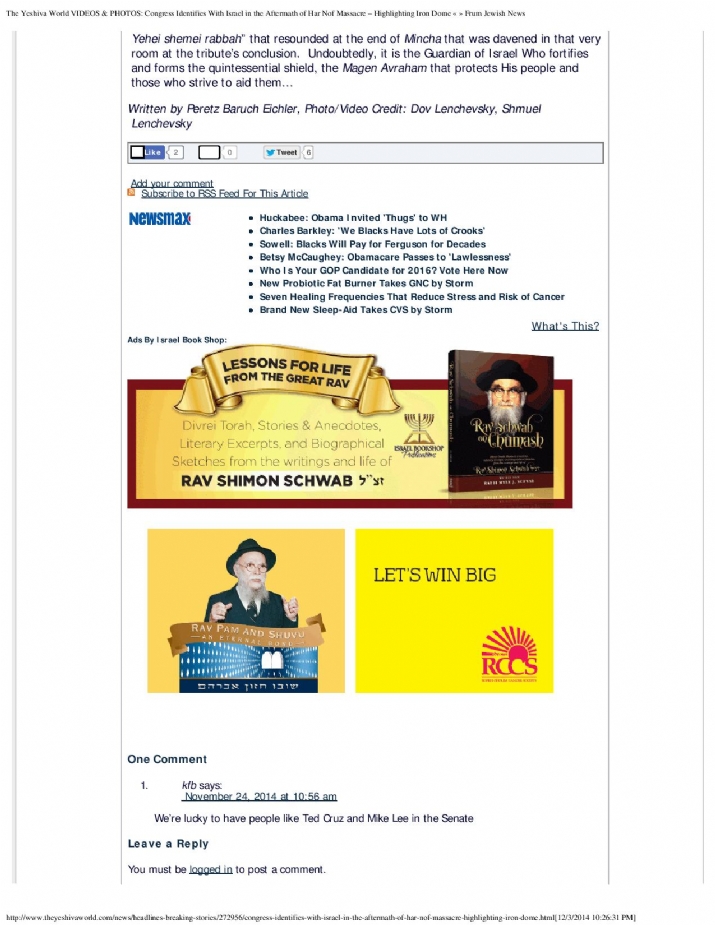 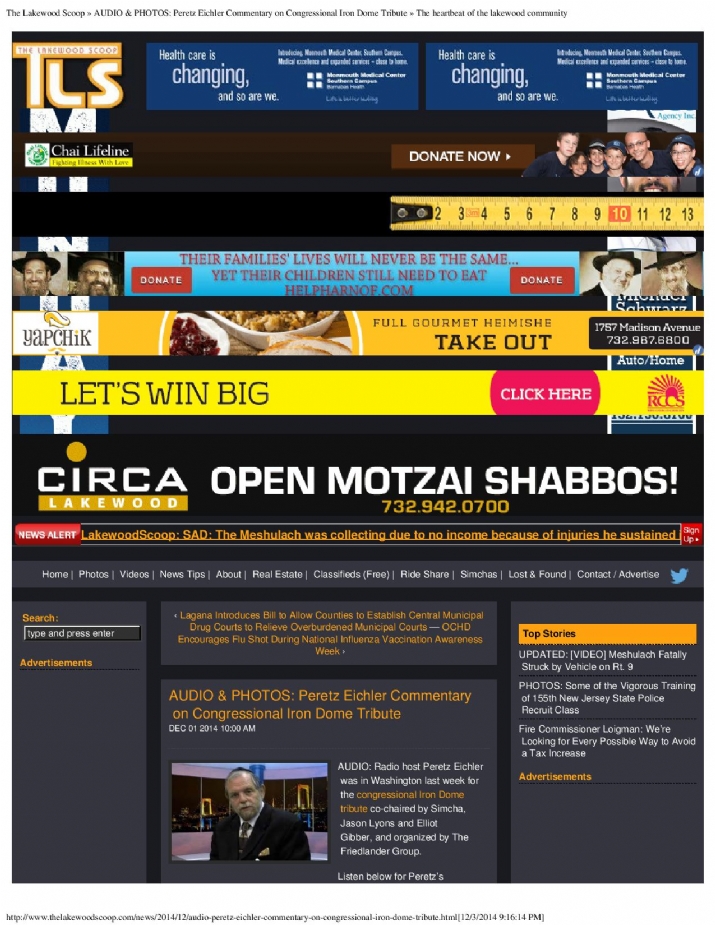 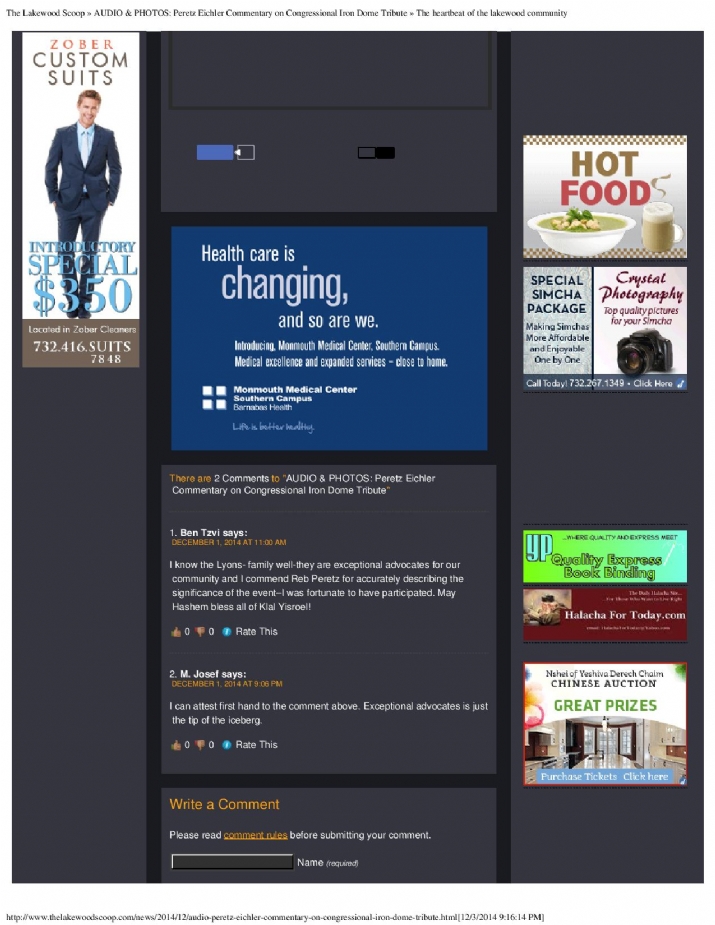