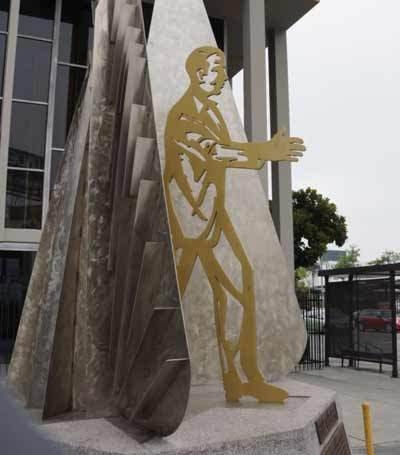 
Earlier this month the Jewish Family Services, Los Angeles City Councilman Paul Koretz, the Los Angeles Museum of the Holocaust and numerous L.A. political and community leaders hosted the rededication of the Raoul Wallenberg Statue. The statue has stood for the last 25 years in the heart of the city’s Jewish community, at the corner of Beverly Blvd. and Fairfax Ave. – known as Raoul Wallenberg Square. It features a golden silhouette of a man with an outstretched hand, flanked by two stainless steel wings symbolizing Wallenberg’s role as an angel of mercy.

Stanley Treitel, a member of the Raoul Wallenberg Centennial Celebration Commission, coordinated much of the day’s program. “Raul Wallenberg was a hero that was swallowed up by the Russians after the war and did not live to be properly thanked by the thousands he courageously saved. We are thankful that we can do something in his memory,” Treitel said. A reception was held in the courtyard of the JFS Freda Mohr Multipurpose Center. Most of the attendees were elderly citizens, many of them Holocaust survivors or children of survivors. One survivor said, “I knew Raoul Wallenberg. He personally gave me a pass.” Another commented, “I saw Wallenberg with my own eyes, how he stood up to the Nazis without fear, demanding the release of Jews that now held passes in their hands.” Yet another said, “Raoul Wallenberg was tall and handsome and a savior of our people. God bless him.”

Raoul Wallenberg was a 31-year-old Swedish diplomat who went to Hungary in 1944 on a mission to rescue Jews from the Nazis. He produced thousands of Swedish passes for Jews who were steps away from entering the cattle cars headed for Auschwitz. Wallenberg also established safe houses in Budapest that sheltered thousands of Jewish refugees. He was arrested in January 1945 by Soviet officials, and was never seen again. It is believed that Wallenberg may have saved up to 100,000 Jewish lives.