One Seaport Plaza - 199 Water Street - 27th Floor
New York, NY 10038
(212) 233-5555
Executive Staff
Home
About Us
Alumni
In the News
Around Town
Recent Events
Our Clients and Projects
Services
Home » Our Clients and Projects » Anwar Sadat Congressional Gold Medal Commission » Israeli and Egyptian Consulates join together at historic event in Beverly Hills marking the 40 years of peace between their two countries

(Los Angeles, CA, June 5, 2019) – On a recent evening, Israelis, Egyptians and Americans of all faiths, gathered together in Beverly Hills to celebrate the enduring peace between Egypt and Israel.  The night was headlined by acclaimed speakers: Ambassador Lamia Mekhemar, the Consul General of Egypt, and Eitan Weiss, the acting Consul General of Israel.

The event was organized by members of the Anwar Sadat Congressional Gold Medal Commission*.  This group also led the effort for Congress to pass legislation to posthumously award the late Egyptian President, Anwar Sadat, with the Congressional Gold Medal; the highest civilian honor bestowed by Congress.  Leading the charge was commission founder and chairman, Ezra Friedlander, CEO of the Friedlander Group, who worked with members of congress for years to obtain their support. Finally, on December 13th, 2018, Donald Trump signed legislation making this Medal a reality.

Ambassador Mekhemar noted fondly in her speech that after forty years of the peace treaty between Israel and Egypt, the agreement has not once been broken. A true testament to the lasting peace between the two nations.

Mr. Friedlander reminded the event’s attendees that this peace was only possible because President Sadat took the bold and courageous step to visit Jerusalem and make peace with Israel; a decision that ultimately cost him his life, but saved countless others.

The Congressional Gold Medal will be presented to the family of President Anwar Sadat and representatives of the Egyptian government at a formal ceremony in Washington, D.C. later this year.

Those who attended and participated in the gathering are hopeful that events like this will remind the world that peace - lasting peace - is attainable. 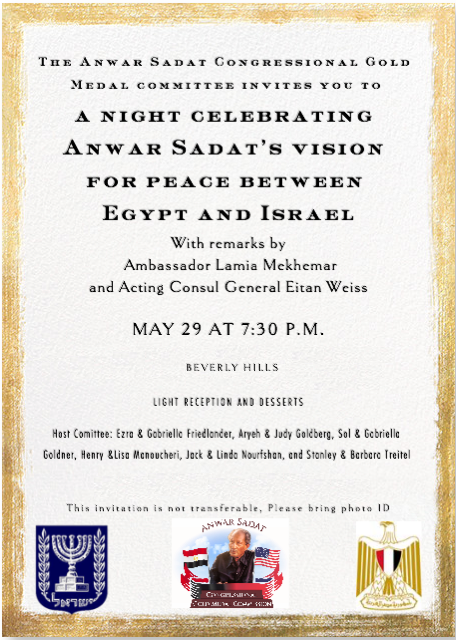