The Iron Dome Congressional Tribute, which was coordinated by Ezra Friedlander and The Friedlander Group, was chaired by Robert Rechnitz, a prominent Los Angeles based Jewish philanthropist and businessman who is the Principal of Bomel Companies.
This historic event was a celebration of the everlasting U.S.-Israel alliance and a tribute to the United States Congress for the Iron Dome Missile Defense System. In addition, there was a special tribute to the memory of Senator Daniel Inouye of Hawaii, who was a courageous defender of the State of Israel, a stalwart supporter of the bond between the U.S. and Israel, and one of the individuals who was instrumental in securing the funding for the Iron Dome.
During the recent conflict in Israel in November 2012, the world witnessed the technological marvels of the Iron Dome Missile Defense System and the unbelievable manner in which it saved the lives of thousands of civilians. With thousands of deadly rockets raining down on Israeli cities, the Iron Dome effectively disabled the overwhelming majority of those rockets and prevented widespread devastation. Since 2009, the Obama administration and the U.S. Congress have allocated an unprecedented $275 million in funding for the Iron Dome. 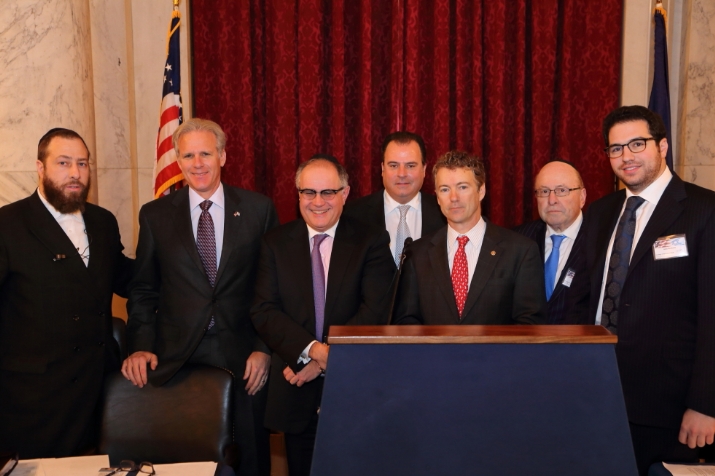 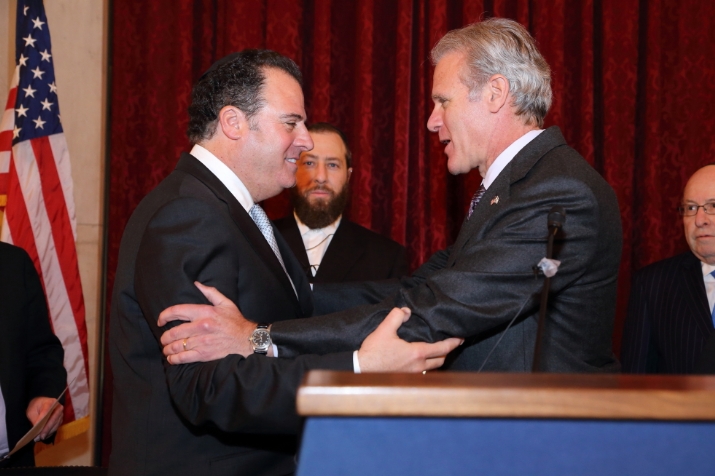 The program began with a gourmet luncheon in the majestic Kennedy Caucus Room of the United States Senate. The emcee was Phil Rosen, Esq., one of the premier corporate and property attorneys in the United States and a prominent Jewish communal leader who is Vice-Chairman of the Republican Jewish Coalition, and the Founding and Current Vice Chairman of the Board of Yeshiva College.
In his introductory remarks, Robert Rechnitz noted that everyone in the room was there to give thanks to the United States. "We have no political agenda," said Mr. Rechnitz. "We are here to simply offer our gratitude to the United States for its unwavering support of Israel."
Republican Congressman Ed Royce of California, who is the Chairman of the House Foreign Affairs Committee, spoke about the 90 percent success rate of the Iron Dome in November and how important it was that Americans got the opportunity to see the defense system work effectively. He also recounted how his father was one of the people who liberated Dachau as a member of the American military during World War II. His father took pictures of what he witnessed in the death camp and embarked on a tour of college campuses in order to tell young adults about the horrors of the Holocaust.

"My overriding goal as Chair of the Foreign Affairs Committee is to strengthen American allies like Israel and weaken our enemies like Iran and Hezbollah," said Congressman Royce.

Republican Senator Roger Wicker of Mississippi talked about the great relationship between Israel and the United States over the past 65 years. "Israel lives in a very unwelcoming and hostile neighborhood," said Senator Wicker. "That is why we need to support the Iron Dome."
Senator Rand Paul, a Republican from Kentucky, spoke about his trip to Israel and how much he enjoyed being there. He told the crowd how he sang Hebrew songs together with a group of rabbis at the Western Wall, even though he had no idea what the words meant.

After giving a "shout out" to "the best ambassador in town - Michael Oren," Republican Congresswoman Ileana Ros-Lehtinen of Florida, a vocal supporter of Israel, noted that she is introducing the Iron Dome Support Act, which is a testament to how much the U.S. values its relationship with Israel. "The Iron Dome saved thousands of lives and it must continue to do so," said Congresswoman Ros-Lehtinen.
Referring to the United States and Israel, Republican Senator James Inhofe of Oklahoma, who is a Ranking Member of the Armed Services Committee, said that "our interests are the same and I am going to make sure that it stays that way."
Democratic Congressman Adam Schiff of California got the crowd laughing while discussing his recent trip to Israel. "When your name is Adam and you're married to a woman named Eve, going to Israel is like coming home. What can I say? It's bashert."
When he addressed the crowd, Ambassador of Israel to the United States Michael Oren noted that the Iron Dome is the first anti-ballistic system to prove successful in combat. "It is literally rocket science," he said.
"The Iron Dome doesn't only save lives, it prevents wars. It's a game changer," said Ambassador Oren. "Behind the Iron Dome stands a marble dome - the Capitol of the United States of America."
Ambassador Oren also discussed President Obama's upcoming trip to Israel and remarked that his visit "will demonstrate an unbreakable alliance and an iron clad commitment between the United States and Israel."
In addition, the Ambassador paid tribute to the late Senator Daniel Inouye and introduced his wife, Irene Inouye.
Mrs. Inouye talked about how much her husband had valued the strong bond between the U.S. and Israel. "Dan wanted peace," she said. "I hope that it will be achieved in our lifetime."
Bill Thompson, Jr., the former Comptroller of the City of New York, commented that, "the celebration of the Iron Dome is a shared victory." Referring to the U.S.-Israel relationship, he said that "our futures will be forever linked."

Chaskel Bennett, a noted community leader from Brooklyn, talked about the scene that unfolds in Southern Israel when the siren sounds to warn of an incoming rocket. "When a siren sounds, you have 15 seconds to get to safety," he said. "Yes, we believe in G-d and prayer, but the Iron Dome is a game changer."

Senator Mark Warner, a Democrat from Virginia, spent some time talking about the tremendous vision that Senator Inouye had when it came to the bond between the U.S. and Israel.
R. James Woolsey, the former Director of the Central Intelligence Agency, and currently the Chairman of Woolsey Partners, LLC, discussed the remarkable nature of the Iron Dome System. "The Iron Dome is inventive and successful," he said. "It avoids wasting defense on incoming rockets that won't hit anywhere sensitive."
When Rabbi Joseph Potasnik, the Executive Vice President of the New York Board of Rabbis, introduced Democratic Senator Brian Schatz of Hawaii, he elicited laughter from the crowd when he said, "as they say in Hawaii, 'shaloa.'"
Senator Schatz talked about his predecessor, Senator Inouye, and the demonstration of his unwavering support of Israel when he secured funds for the Iron Dome. "No one can fill his shoes," he said, referring to Senator Inouye, "but we have to follow in his footsteps." He also talked about the significance of maintaining a strong bond with Israel. "Partisan politics cannot get in the way of Israel's security and our relationship with her."
Republican Congressman Trent Franks of Arizona said that, "the Iron Dome has become the face of missile defense for the world." He also discussed the perseverance of the Jewish people. "After the Holocaust, the Jews wiped away their tears and they built a nation. The Nazis are gone, but Israel remains."
Democratic Congressman Joe Kennedy, III of Massachusetts spoke about his visit to Sderot and the impact that seeing the reinforced bus shelters that doubled as bomb shelters had on him. "The only thing Israel asks for is the right to exist," he said. "That's not too much to ask."
Democratic Congressman Eliot Engel of New York, the Ranking Member on the House Foreign Affairs Committee, said that the Iron Dome "allowed the United States to put its money where its mouth is."

Upon the conclusion of the tribute luncheon, the attendees participated in a special White House briefing with members of the Obama administration, including Zachary Kelly, President Obama's liaison to the Jewish community, Andy Abel- Director for Israeli, Palestinian and Jordanian Affairs for the National Security Staff and Eric Lynn, a senior policy official on Mideast affairs at the Department of Defense who was presented by Robert Rechnitz with the Iron Dome Medal in recognition of President Obama's key role in the development of the Iron dome anti-missile defense system.