One Seaport Plaza - 199 Water Street - 27th Floor
New York, NY 10038
(212) 233-5555
Executive Staff
Home
About Us
Alumni
In the News
Around Town
Recent Events
Our Clients and Projects
Services
Home » In the News -all » Op-Eds, Features and Interviews » Education: End or Means?

Wednesday, August 19, 2015
Op-Ed in Mishpacha Magazine
Much is being said about Yaffed, a New Yorkbased group led by ex-chassid Naftuli Moster. In an ostensible effort to improve the quality of education in yeshivos, Yaffed sent a letter to New York City Schools Chancellor Carmen Farina and seven district superintendents, calling upon them to investigate "the quality of secular education, and in particular English instruction, at (the listed) Yeshivas, and to take steps to ensure that pupils at these Yeshivas receive the essential and substantially equivalent education to which they are entitled." A noble endeavor, it would seem. After all, who would not want to see our yeshivos offering improved instruction to their students? As a parent of yeshivah kids myself, I would be delighted to know that my children's education was being upgraded.

The problem here was not the end, but the means. Mr. Moster's claim may be valid, but by involving the Department of Education, he has essentially declared war on the yeshivos, which can only have a detrimental effect on his self-proclaimed sincere desire to improve the yeshivah-education system. He has therefore, unfortunately, disqualified himself from the discussion. There's no small irony in calling upon the DOE to police our schools. The halls of any yeshivah are a lot safer for both teachers and students than the halls of DOE-supervised schools, providing an environment far more conducive to learning than that of public schools, where substance abuse, immorality, and violence are prevalent.

In fact, New York State reported that in standardized exams administered for grades 3 to 8, a mere 30.6 percent of students in New York City passed the English exams, and only 36.2 percent were proficient in math.

Having said that, I think that Yaffed's accusations do compel us to take a long, hard look at the quality of secular education in our yeshivos. With Yaffed plastering New York City's billboards with Chazal's dictum that a father must teach his child to earn a living, we need to consider whether we are indeed shirking our responsibility in that regard. Are our children receiving an education that will allow them to support their future families?

In today's world, the pursuit of an education has become synonymous with earning a degree - a piece of paper - rather than acquiring practical skills. And it's not just about getting a BA - today, without a master's degree, you're not educated. Whether that "education" can actually provide anyone with parnassah is anyone's guess - as countless bar-certified, jobless attorneys can attest - but somehow, being "educated" has become an end in and of itself in the secular world.

Lest anyone jump to critique this last statement - yes, I am aware that many professions do, in fact, require degrees - I am referring to equipping our children with the knowledge and skills that will enable them to enter the workforce in the vast array of career choices that don't require a degree. And that, I think, is where the secular and Orthodox Jewish views of education clash. To us, secular education is merely a means to an end, a way to support our families respectably. I would therefore like to steer the focus on "education" away from the goal of enabling our children to obtain pieces of paper, toward a more pointed question: Are we giving our children the skills and knowledge they will need to become independent, productive adults?

We must realize that giving children the skills to earn a living is a parent's duty. We delegate much of that duty to our children's schools, just as we delegate to schools much of the duty to teach our children Torah. But the onus is essentially upon us, because the overburdened budgets of yeshivos can hardly cover the expense and logistics of providing better secular education without our involvement. To counter Yaffed's "It's your mitzvah. It's the law" billboards, we have to find creative ways to increase funding to yeshivos so that they can provide quality education in all departments. Parents must feel the obligation, and yeshivos must work hand in hand with them, to create an afternoon curriculum that will allow our children to be properly trained to enter the workforce. Math and English-language skills, in particular, are crucial nowadays to practically any area of employment. Other subjects - science, history - can often be mastered later in life if necessary, but weaknesses in reading, writing, and verbal expression are not easily rectifiable in adulthood. It's the job of the schools to teach these skills, but what is a school if not the collective efforts of a group of like-minded parents to educate their children? If we take our responsibility vis-à-vis our children's future seriously, then we can't just leave it to the schools and their chronically strained budgets to do the job for us, and then grumble that they are not doing a good-enough job. Nor can we leave it to Yaffed to force our schools, through external intervention, to improve the quality of yeshivah education.

Parents must also realize that they hold the keys to paving the path for their children to find their income-earning niche. A school is an institution, geared toward providing a uniform education to masses of students. We can decry the inherent weaknesses of the "system," but the fact is that "chanoch l'naar al pi darko" is primarily the province of a parent. It is not realistic to expect a teacher in a crowded classroom to provide a personalized educational path for every student. We are therefore witnessing the mass production of cookie-cutter students - one type, one derech - because the parents, who should be encouraging each child to pursue his personal strengths and interests, are not viewing this as their responsibility.

I possess a unique personal perspective in this regard. I am a product of chassidishe yeshivos, and today I lead a consulting firm, The Friedlander Group, based in New York and Washington DC. I grew up in Boro Park and attended a yeshivah by the name of Bais Yehuda, which was under the leadership of the Debreciner Rav ztz"l. Unfortunately, the yeshivah closed down when I was in the fifth grade, so I transferred to a different yeshivah, Be'er Shmuel, for several years, until it, too, closed down. (Please don't get the wrong idea - the closing of these yeshivos had nothing to do with me!) Before my bar mitzvah, I learned in the Viener yeshivah, and then my father enrolled me in Mesivta Eitz Chaim of Bobov. How did I, a graduate of these yeshivos, come to establish a consulting firm? As a teenager, I became interested in politics and government. Although I continued learn in yeshivah, I occasionally traveled to Washington DC to witness the workings of the federal government firsthand. (Back then, a one-way youth ticket to Washington cost me $25 on People's Express.)

My interests definitely differed from those of my peers, but my father, the Liska Rav, allowed me to pursue them. Eventually, these interests turned into a career. Had my father condemned my interest in politics at the time, chances are that I would have been resentful, and who knows where that would have led me. But because I encountered no resistance from my parents, I never felt the need to rebel or to discard my chassidic garb and customs. Instead, I honed my political skills within the context of yeshivah and family, and I pursued my interests not only with my father's cooperation but with his blessing. He recognized my passion and understood that if properly channeled, it would provide me with expertise in a field that I could ultimately turn into a profession. Along the way to launching my consulting firm, I experienced many trials and tribulations, and there were plenty of times that I felt very vulnerable. I can honestly say that had I not been blessed with encouragement in my youth, I don't know if I could have developed my career into what it is today. To earn a living in today's competitive economy, a person needs tremendous patience, perseverance, and self-confidence. It is our imperative to equip our children with necessary skills at an early age and encourage each of them to develop their unique abilities, through which they will, with siyata d'Shmaya, find their income-earning niche and be able to support themselves, their families, and ultimately, our community. - 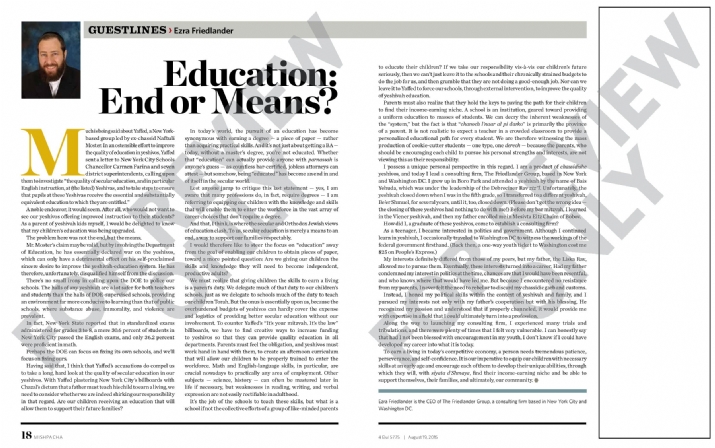