Congressional Luncheon to celebrate the passage of the Senate Bill

Celebrating the passage of the legislation to award Raoul Wallenberg with a Congressional Gold Medal.

Legislation to recognize World War II hero Raoul Wallenberg with the country’s highest civilian honor was passed unanimously on July 11, 2012  by the Senate.  The bill, S. 1591, was introduced by Senator Kirsten Gillibrand of New York with co-sponsors Senator Mark Kirk of Illinois, Senator Mike Johanns of Nebraska, Senator Carl Levin of Michigan in an effort to award Wallenberg with a Congressional Gold Medal, in recognition of his heroic acts during the Holocaust and is expected to be signed by President Obama shortly.

“Raoul Wallenberg’s heroic rescue of Hungarian Jews during one of the darkest hours of human history exemplifies his outstanding spirit, his dedication to humanity and the responsibility for us all to speak out against atrocities,” Senator Gillibrand declared “I am proud that Congress has recognized Raoul Wallenberg's extraordinary and enduring courage by passing my bipartisan bill bestowing him with the Congressional Gold Medal.”

Wallenberg was a Swedish diplomat recruited by US War Refugee Board to save Hungarian Jews from deportation in 1944 and was given a diplomatic passport, a large sum of money and instructions to save as many lives as possible, using any means at his disposal.  He is credited with saving more than 100,000 Hungarian Jews over a period of six months by creating multiple safe houses, removing Jews from trains departing to Auschwitz, pursuing convoys carrying Jews, threatening and bribing both German and Hungarian officers and issuing forged identification papers, including the Schutzpass, an impressive looking but counterfeit Swedish passports. Wallenberg was arrested by Russian soldiers in January of 1945 and his fate remains unknown.

Among those who were saved by Wallenberg was the Liska Rebbe, Rabbi Yoizef Friedlander z’l, whose grandson Ezra Friedlander is CEO of The Friedlander Group, which founded the Raoul Wallenberg Centennial Celebration Commission.  This national campaign was established in order to commemorate and publicize Wallenberg’s historic and heroic actions in honor of what would be the centennial of his birth on August 4.

The culmination of the legislative process to award Wallenberg with The Gold Medal, commenced on the morning of July 11, where Senator Gillibrand urged her colleagues on the Senate floor to vote in support of the legislation and at a private meeting between the Wallenberg Board and Senator Michael Bennet of Colorado. Senator Bennet presided over the Senate during the vote that evening and remarked that “as the son of an immigrant family with Jewish heritage that escaped the Holocaust, it was especially meaningful and powerful to call up this bill and see it passed,”

Honorees included: Andrew Stevens, a Holocaust survivor who forged documents used by Wallenberg in his rescue efforts, Emil Fish Founder and President of the Bardejov Jewish Preservation Committee, which works to preserve and create a memorial to the survivors of the Holocaust in the Jewish Suburbia in Bardejov, Slovakia, Dr. David Moskovits President of the Endowment for Democary of Eastern Europe, who established the first American and Jewish school in post Soviet era Hungary, and marked the sixtieth anniversary of the Claims Conference which negotiates restitution to Nazi victims and their heirs. The luncheon was chaired by LA Fire Commissioner Andrew Friedman, Esq.

Anna Stumpf delivered a message from Ambassador Szapary of Hungary. Matty Lichtenstein spoke about her work at Project Witness, a comprehensive non-profit Holocaust resource center whose goal it is to educate today’s youth on the Holocaust so that the legacy of both victims and survivors can serve a guide towards a better tomorrow.

“As the world gears up for Wallenberg's centennial on August 4, 2012, we should remember and celebrate the fact that today, there are hundreds of thousands of American Jews who are the direct descendants of those saved by Raoul Wallenberg,” said Ezra Friedlander. “Special thanks are due to Senator Gillibrand and members of the Wallenberg Commission who include: Ken Abramowitz; Abe Biderman; Leon Goldenberg; Erol User; Stanley Treitel; Charles Freeman; Sidney Greenberger; William Nussen; Jonathan Zalisky and Peter Rebenwurzel for their hard work and commitment to this historic effort, allowing the world to pay tribute to the extraordinary heroism of Raoul Wallenberg.” Flushing Bank, Healthplus Amerigroup and Gil Cygler from AllCar Rent-A-Car are the corporate sponsors of this project.

A companion bill introduced in the House of Representatives by Congressman Gregory Meeks and Congresswoman Nan Hayworth, both of New York, was unanimously passed on April 16th in honor of Holocaust Remembrance Day.

The Congressional Luncheon, July 11, 2012 in the Senate Hart Office Building 902 on Capitol Hill. 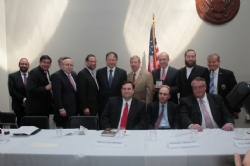 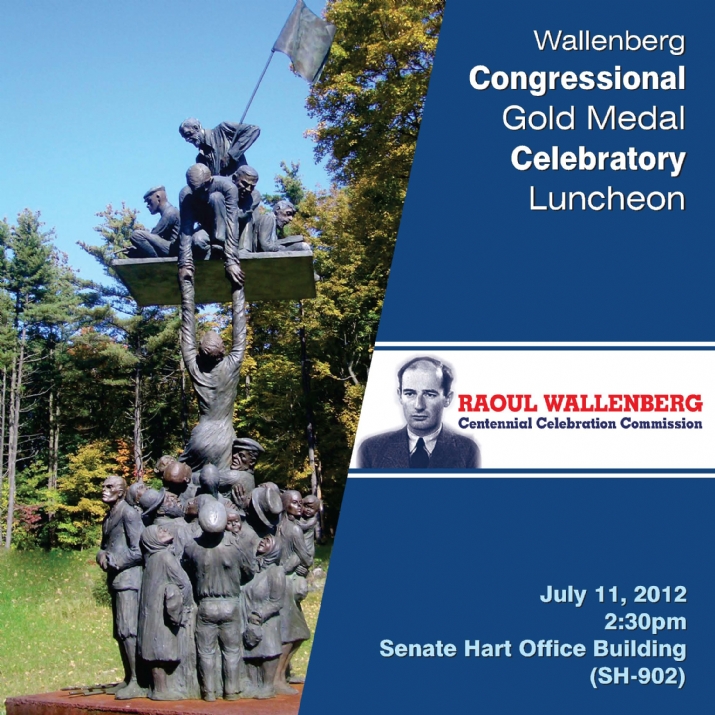 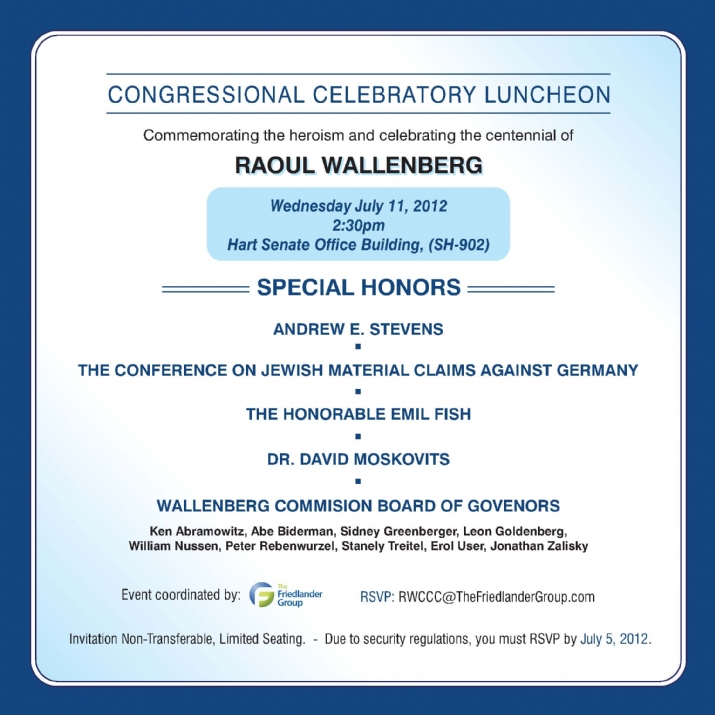 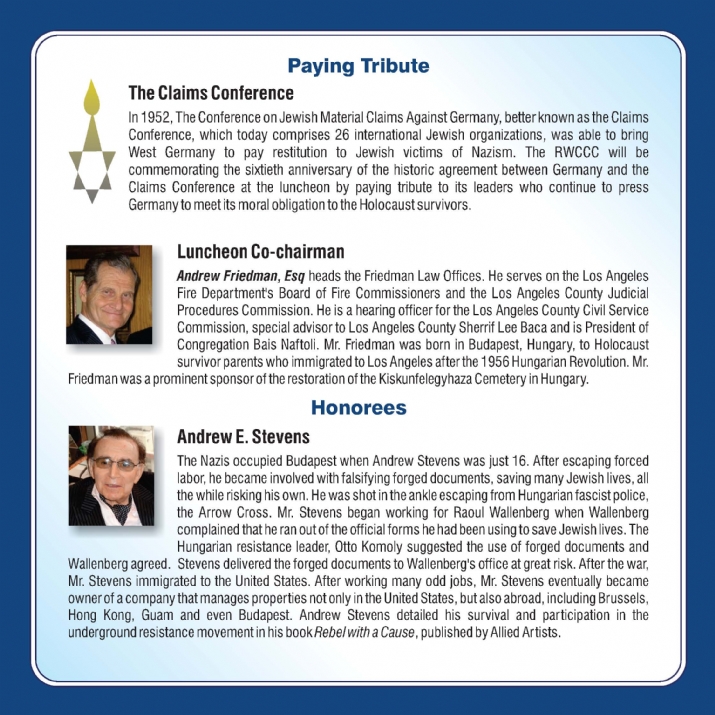 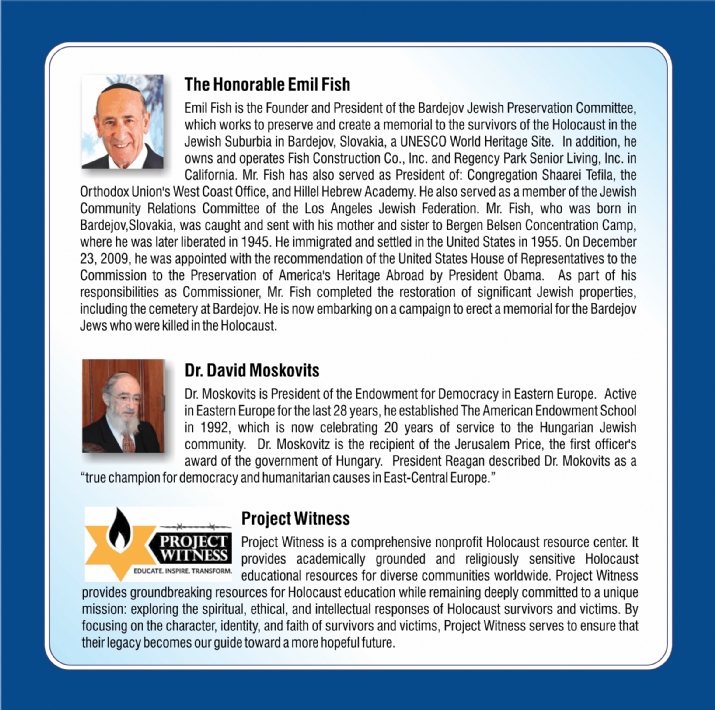 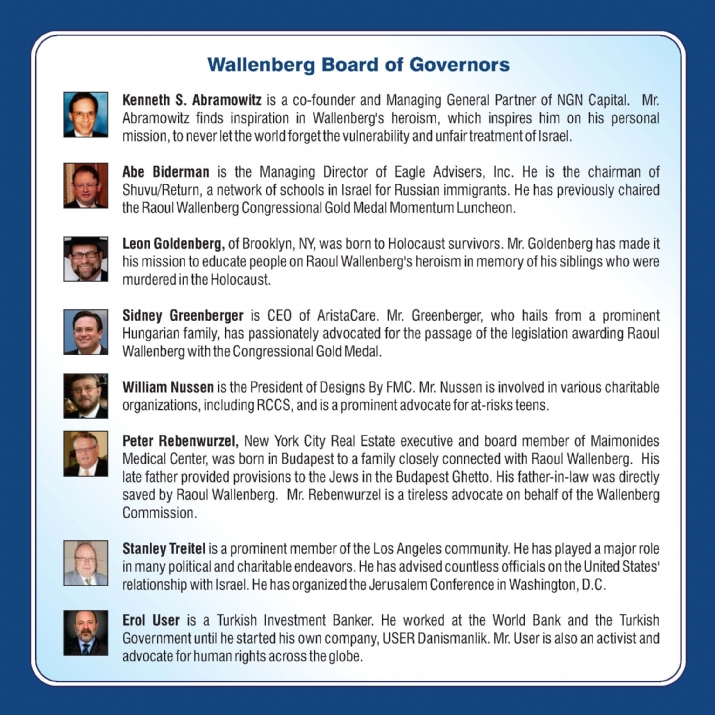 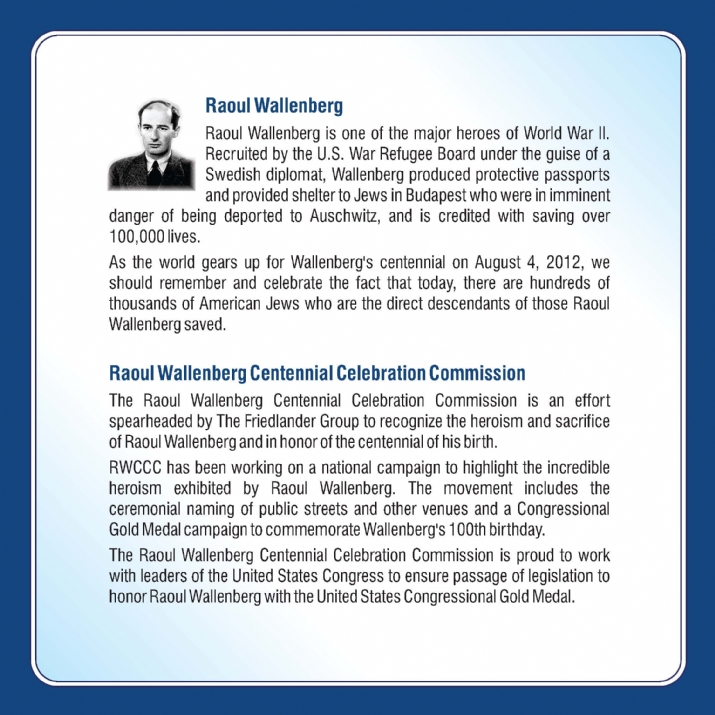 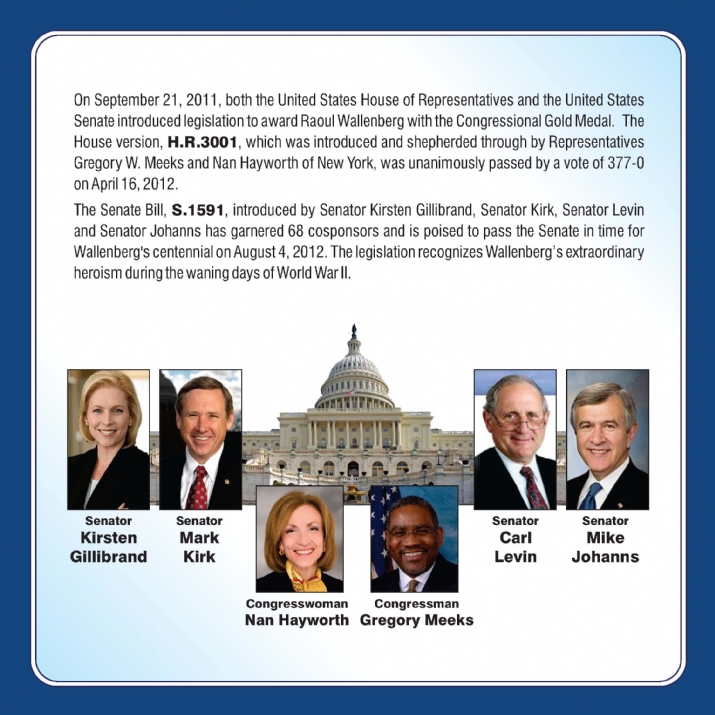 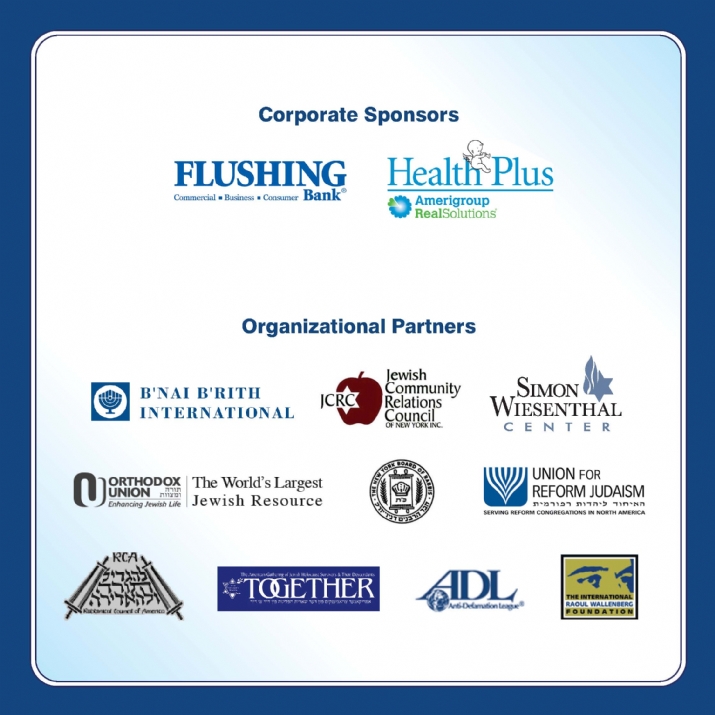