Wednesday, April 17, 2013
Hamodia article BY DEVORAH BLUMBERG Mr. Leon Goldenberg, Wallenberg Commission Board Member and a child of Holocaust survivors, spoke to fifth-eighth–grade students about his family’s experiences during the War.

In commemoration of Yom Hashoah, Holocaust Memorial Day, Mr. Leon Goldenberg spoke with Shalom Torah Academy students in fifth through eighth grades about his family’s experiences during and after the war, and about the heroism of Raoul Wallenberg. Students listened attentively to his account of the chaos and anti-Semitism of the war period, the indifference of so many to the plight of the Jews and the heroism of others, the displaced persons camps, and the small and large miracles that saved Jewish lives.

Mr. Goldenberg and his wife, Agi, are children of Holocaust survivors. His father lost his first wife and five children during the war and never spoke about his experiences. “The secrets of his suffering were buried along with him,” Mr. Goldenberg stated. His mother survived Auschwitz with her four sisters.

Mr. Goldenberg was on the Raoul Wallenberg Centennial Celebration Commission and successfully urged Congress to award a posthumous Congressional Medal of Honor to Mr. Wallenberg on what would have been his 100th birthday. Raoul Wallenberg, a Christian Swedish diplomat, helped save the lives of 100,000 Jews during the war, including Agi Goldenberg’s mother and aunts.

Mr. Goldenberg is the chairman of Shalom Torah Center’s board of directors and is the dedicated benefactor of the Goldenberg Jewish Education Grant, which awards up to $5,000 to qualifying new Shalom Torah Academy students. 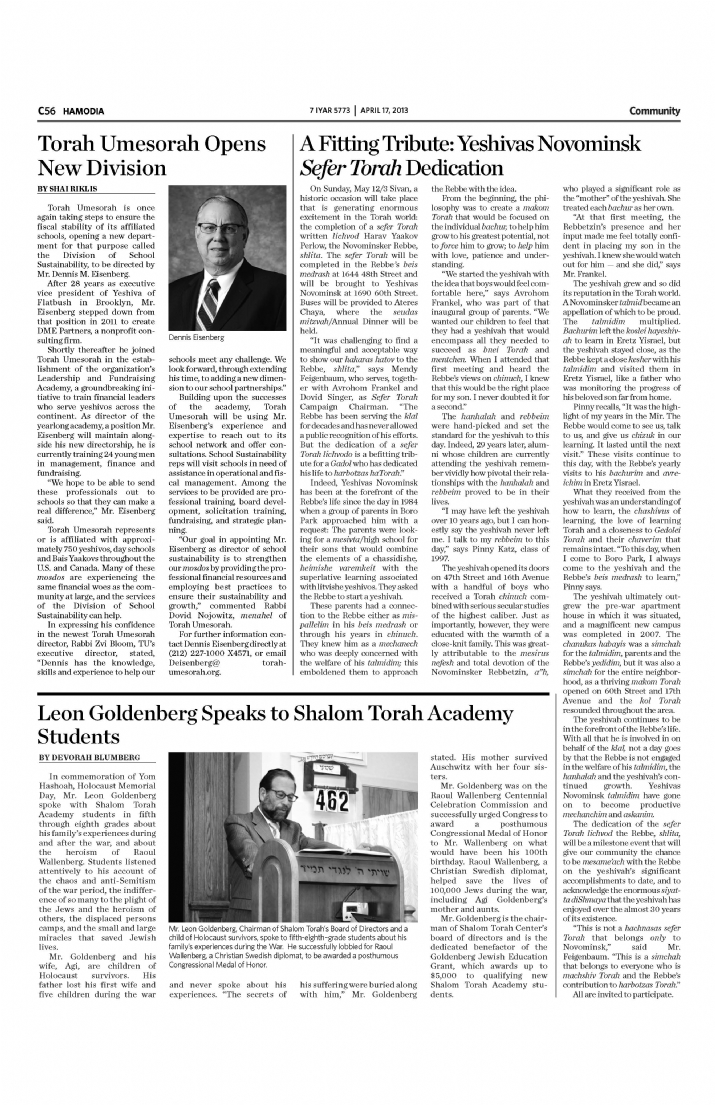