One Seaport Plaza - 199 Water Street - 27th Floor
New York, NY 10038
(212) 233-5555
Executive Staff
Home
About Us
Alumni
In the News
Around Town
Recent Events
Our Clients and Projects
Services
Home » In the News » Op-Eds, Features and Interviews » A Proper Perspective - The Pope And The Jewish People

A Proper Perspective - The Pope And The Jewish People

Tuesday, May 27, 2014
Op-ed about Pope Francis' visit to Israel
As the Pope has left Israel, it’s time for us to reflect on his visit and the impact it has had on the Jewish people worldwide.

Reflections on a visit of this magnitude are never easy, for the ramifications are difficult to predict. But of one thing I am certain. The Jewish people are better off for it.

It’s now seventy years since the cattle cars ran to Auschwitz at full capacity and the world was silent. At that time, even the Vatican insisted on maintaining ‘neutrality’ and the debate continues to rage until today on whether the Pope did enough to save the Jews.

But now we have a Pope who is visiting the State of Israel accompanied by an Orthodox Rabbi who has worked with him for decades.

I wonder if some of us are living in a cocoon, unable to recognize the enormous, indeed epic, goodwill that this visit has generated. In an instant transmission of image and intent, the Pope’s visit to Israel has resulted in sending the powerful message that the leader of 1.2 billion Catholics is a friend of the Jewish people worldwide. He has unequivocally denounced terrorism, sending a signal to all those who cherish life that a religious leader with the unparalleled status of the Pope has publicly declared a kinship with the Jews.

To all those who don’t understand or appreciate the significance of this, I say: There was a time when Priests would rile up anti-Semitism—Thank G-D that is no longer the case. I agree it’s important to remember and recognize Christian persecution of the Jewish people throughout the millennia. But we also have the responsibility to behave appropriately and respectfully when the leader of the Roman Catholic Church visits the homeland of the Jewish people, denounces terrorism, embraces Holocaust survivors, makes a plea for peace, and connects emotionally with the Jewish people.

We are a nation small in numbers. Goodwill goes a very long way.

I have seen the criticisms against those who are welcoming the Pope and I find that disapproval to be the result of a small minded world view.

Unfortunately, in this technologically advanced age, even this minority dissenting opinion can reach millions and can convey the mistaken impression that this is mainstream thought.

Hopefully my words today will allow level headed people to realize that a visit from the Pope is akin to a visit of a head of State. Historically, we owe him respect. Back in Europe, Rabbonim of great stature would welcome a visiting dignitary with a Sefer Torah as a gesture that underscored the proper recognition given to someone in a powerful position. In fact, the Vatican is a sovereign entity that enjoys diplomatic relations like other nations do. The Pope is essentially the leader of over a billion followers who look up to him with reverence, and he deserves to be welcomed with respect. We would want no less for our own leaders if the tables were turned.

We see that even great sages in the Talmud understood and displayed great sensitivity regarding interactions with non-Jews: The Talmud in Berachot 17a.) discusses that Rabbi Yochanan Ben Zakai always did manage to greet everyone in the market “first” including non-Jews.

I will not attempt to make analogies to the subject at hand but it is self understood that when a Pope who is the revered leader of a billion people visits it is obligatory to show proper respect. 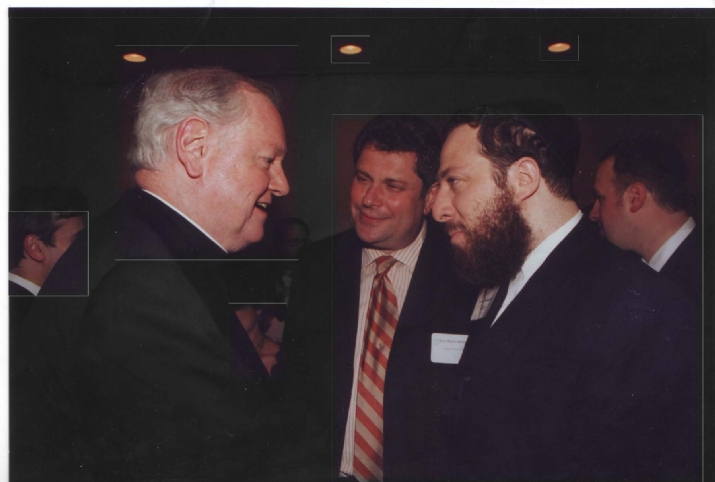 We live in a world where threats to the Jewish people abound. We have seen it in Brussels and we have seen it in Brooklyn as well. Why should a Catholic in New York or anywhere else sense that we have not treated their leader with respect? Are we prepared to consider the damage that could chas v’sholom occur?

Here in America, we are blessed with unprecedented freedom and protection. But that same status isn’t enjoyed universally. There are those who are living in fear of anti-Semitic attacks So when we welcome a Pope to the State of Israel there should be a wall to wall warm welcome without dissension. The people of the shtetl understood this. Why can’t we?

We certainly are entitled to disagree about church policies. And we are certainly permitted to express our opinions. But at the same time we must understand that the Pope’s visit is both historic and humbling to the Jewish people. Especially this specific Pope who has shown himself to be our friend decades before his election as the leader of the Catholic church. I have firsthand knowledge of the Pope’s relationship with the Jewish community in Buenos Aires in which he demonstrates a deep and sensitive friendship.

And lest we think that what happens overseas and six thousand miles away has zero impact on us, I assure you it does. The Jewish community and the Catholic community have much in common, most notably the parochial schools in which we teach our children. We share a common goal in working to alleviate the cost of tuition in constitutionally permissible ways. Hence, a coalition has been formed over the decades between our communities as we seek out ways to help parents who are struggling with tuition payments.

Back in 2008, I recall having a conversation with Cardinal Egan, then of the Archdiocese of New York, in which he passionately expressed his feelings about this issue. At the time, my firm was coordinating an event on behalf of TEACH-NYS, a strong coalition of Jewish and Catholic school leadership. The Cardinal took the trouble of traveling to Albany several times because he felt so strongly about this. Ultimately the efforts paid off and an unprecedented child tax credit was voted in, benefiting Yeshiva parents as well. This came about primarily as a result of the strong coalition that existed between Jewish and Catholic school leaders. Imagine if we would have foolishly jeopardized that relationship back then!

Let’s remember that respecting others is a basic tenet of our faith. We are not advocating for anyone to deviate from our traditions or our customs, merely to respect the beliefs of others. Let’s remember that words are very powerful and that actions often cause reactions. So let’s choose our words carefully, both publicly and privately. And let us hope that the Pope’s visit will help to usher in an era of peace and tranquility for the Jewish people around the world.