"From serving in our armed forces and government to growing our economy and fighting poverty, from advancing our understanding of medicine and science to combatting intolerance and bigotry in our midst, Jewish Americans play a critical role in shaping our country and making our union more perfect." said House Majority Leader Steny Hoyer at the annual Congressional celebration. May is dedicated as Jewish-American History Month.

Congress hosts the event annually as an opportunity to recognize the American Jewish community and the impactful contributions to the United States. This year the annual Capitol Hill celebration was adapted a to a virtual setting as Congress paid tribute to Abe Foxman, a Holocaust survivor and the now retired long-time director of the Anti-Defamation League who is a life-long fighter of anti-Semitism.

While due to Pandemic restrictions the event could not be hosted in-person in the US Capitol, the event was just as impactful thanks to the meaningful contributions from scores of legislators from across the ideological spectrum and senior Biden Administration officials

Steeped in history, the Jewish Heritage Month was initiated in 1980, first as a week in April, and then designated as the entire month of May by President Bush in 2006 as requested by Congress.

This event, in conjunction with the larger Jewish Heritage Month, allows the nation to commemorate the Jewish community as a whole and the individuals within it. The American Jewish contribution has played a significant role in the progress and the success of the United States, across a diverse range of contributions: science, the arts, law, and education.

Those who attended the event focused on the common theme of the recent rise of hate for others in America — anti-Semitic, anti-black, and anti-Asian hate — and how this bigotry must be rejected completely in order for America to remain committed to its principles as a nation. They highlighted how Honoree Abe Foxman exemplified dedication to defending against this hate, especially through his position as the former director of the Anti-Defamation League. Representative Mike Garcia expressed this sentiment by stating how Abe Foxman’s “service to the Jewish community and to our nation is going above and beyond” through both his efforts as an activist and as the director of the ADL. Ambassador Samantha Powers identified the “profound difference” Abe Foxman made through “his storied career” as “the defender of the rights of immigrants and religious minorities,” in her introduction of Abe Foxman’s tribute who warmly depicted ‘her dear friend’, as “placing at the center of his very being the notion that injustice anywhere is a threat to freedom everywhere.”

House Majority Leader Steny Hoyer underscored Abe Foxman’s outstanding leadership saying” As the national director of the Anti-Defamation League for nearly 30 years, Abe helped lead our national effort to confront hatred and end the scourge of anti-Semitism, at a time when anti-Semitism is alarmingly and sadly on the rise, the work that Abe oversaw, and that the ADL and other organizations continue to undertake is as essential now as it’s ever been.”

The celebration of Jewish Heritage Month is always bipartisan, with attendees from both sides of the aisle joining to commemorate the Jewish community in America and Abe Foxman on his 81st birthday. Senator Steve Daines remarked that “we stand united in our fight against anti-Semitism and Abe’s legacy inspires the ongoing fight against oppression at home as well as abroad,” a sentiment that was echoed by many other members of Congress. Senator Ron Wyden extended this by commenting on the “sharp rise in anti-Semitic attacks and other expressions of hatred” in the past few years, and how this necessitates the important work that Abe Foxman is doing.

This was emphasized throughout the event: Senate Majority Leader Chuck Schumer reflected on the “immense contributions that the Jewish people have made to this great country of ours” and how “America would not be the same without the Jewish people.” Conversely, as “the highest elected Jewish official ever in American history,” Senator Schumer stated that his success was enabled by America fostering “acceptance and prosperity” for Jewish people.

The event was characterized by many warm remarks and personal anecdotes exemplified by senior White House officials including former UN Ambassador and now Administrator of the US Agency for International Development Samantha Powers description of her dear friend, the honoree Abe Foxman as “placing at the center of his very being the notion that injustice anywhere is a threat to freedom everywhere.”

In addition to touching on the accomplishments of the American-Jewish Community, attention was given to the road-ahead and the never-ending need for advocacy in light of the rise in anti-Semitic violence and creed-centered-hatred at home and around the world a reoccurring theme highlighted throughout the remarks of Susan E. Rice, Assistant to the President for Domestic Policy and Director of the White House Domestic Policy Council who acknowledged both the success and struggle of the Jewish-American population, asserting that “combatting the evils of anti-Semitism and hate requires constant vigilance and ceaseless effort” — a commitment that Abe Foxman embodies with his actions. She emphasized how Jewish ideals described in the Torah cultivates the progress of America, and how Abe Foxman is a manifestation of both those ideals and progress. "We know that the American Jewish experience remains shaped by bigotry and tragedy, by ignorance and injustice. From Poway to Pittsburgh, in recent years we have been reminded again and again that combatting the evils of anti-Semitism and hate requires constant vigilance and unceasing effort. Few have taken up that challenge like Abe Foxman."

Susan E. Rice, Assistant to the President for Domestic Policy and Director of the White House Domestic Policy Council acknowledged both the success and struggle of the Jewish-American population, asserting that “combatting the evils of anti-Semitism and hate requires constant vigilance and ceaseless effort” — a commitment that Abe Foxman embodies with his actions. She emphasized how Jewish ideals described in the Torah cultivates the progress of America, and how Abe Foxman is a manifestation of both those ideals and progress.

In response to his tribute, Abe Foxman remarked on his gratitude for his luckiness in life, “the Miracles of G-D” and his belief in America’s “capacity to be a more tolerant, fairer, more just country,” and that “America can lead the world to be a better, fairer, more just universe.” He also emphasized his belief in the “truth, and that truth can conquer prejudice,” the “power of good people,” and “Jewish people.” He concluded with the idea that “people are born free of hate or prejudice” and that “words make a difference” asserting that “we can change people’s minds and hearts” and facilitate unlearning hatred to nurture a better version of America and of the people who live within it.

The virtual event was produced by the National Museum of American Jewish History and hosted on its various platforms and coordinated by The Friedlander Group. 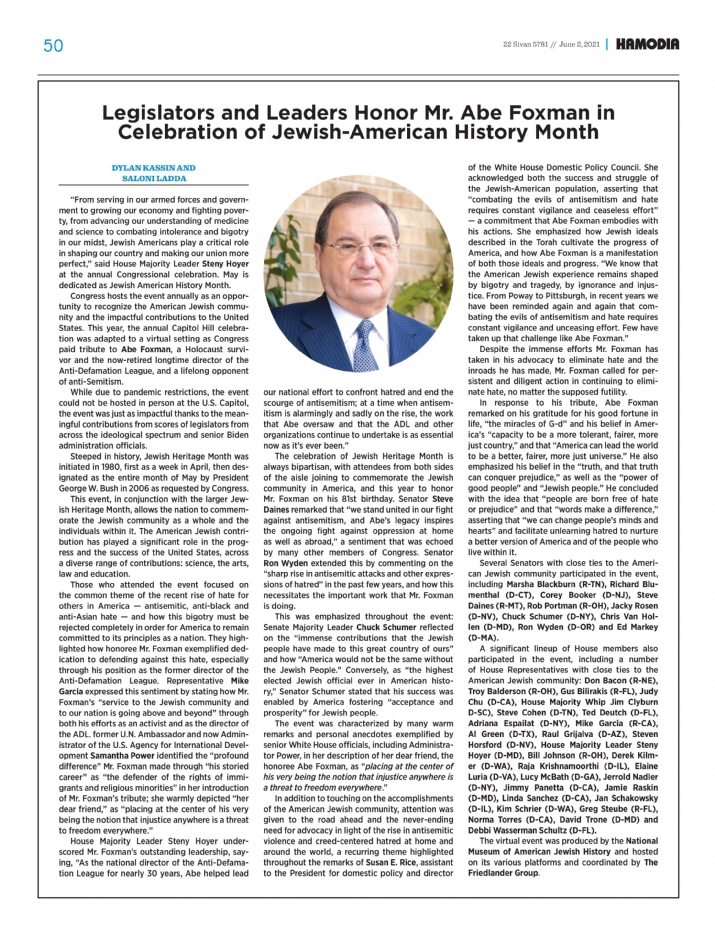 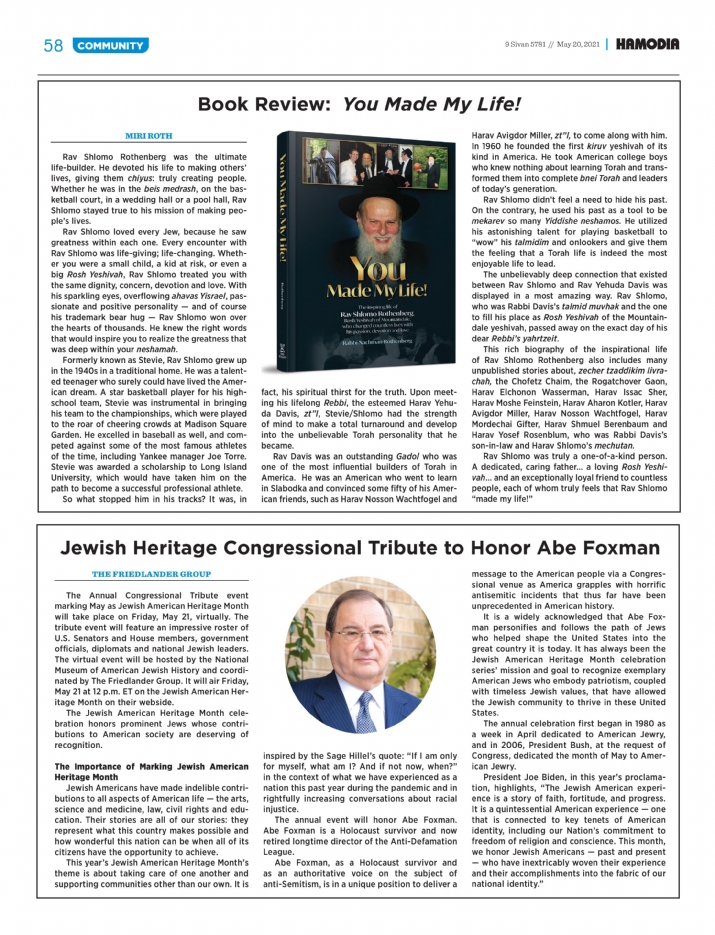